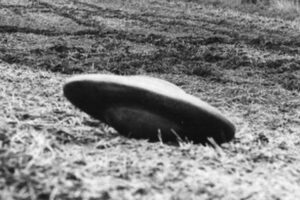 Over 200 students and teachers witnessed an unexplained flying object on Wednesday 6th April 1966 around 11.00 am. They reported it descended into a nearby open wild grass field adjacent to a grove of pine trees in an area known as The Grange.

The object then ascended in a north-westerly direction over the suburb of Clayton South.

Shane Ryan is a researcher looking for eyewitnesses. “It happened on the Wednesday before Easter, April 6, 1966, about 11 0’clock in the morning.

Around about 200 people, most of them students at what was then called Westall High School, were out for morning recess”, says Shane. “Many saw the strange object descend behind pine trees in The Grange Reserve, and then later ascend and fly away at great speed.

The people who ran over to the reserve found a huge ring in the paddock where the object had been seen. 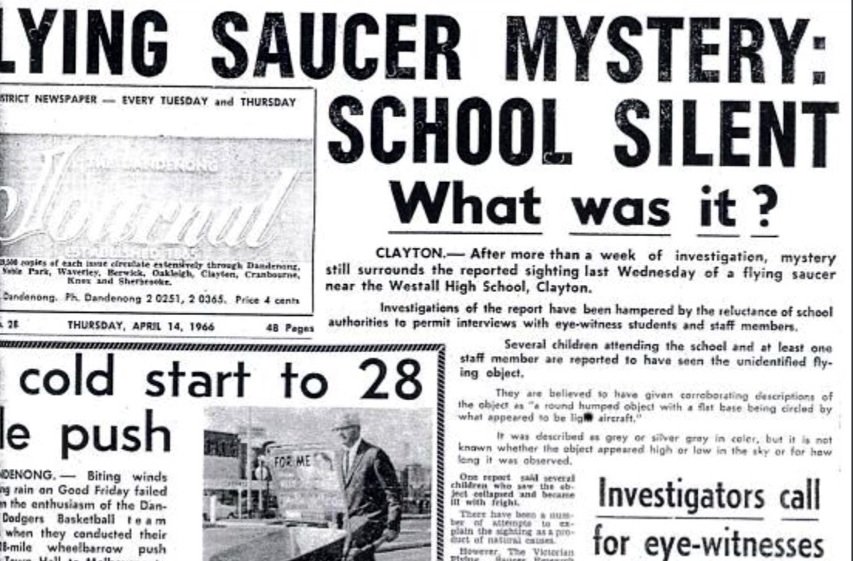 Just what did flash out of the sky and into the lives of hundreds that April day? Stephen Cauchi reports.

A Canberra academic is investigating one of Australia’s most compelling UFO mysteries, a sighting by hundreds of people in the Melbourne suburb of Westall on April 6, 1966.

More than 200 students and staff from two schools watched as the object landed in a nearby paddock, lifted off and vanished.

Shane Ryan, an English lecturer at the University of Canberra was alerted to the events in the 1980s by a housemate who was there. Unlike most UFO sightings, the Westall object had a large number of credible witnesses. It was viewed in daylight and attracted a forceful response from police and the RAAF.

“It had these rather interesting elements which indicated to me that, unlike some other so-called UFO stories, there was some substance to this,” he told The Sunday Age.

“I knew the 40th anniversary was coming up, so I thought it was timely to do some research on it.”

Mr Ryan has interviewed about 30 witnesses, mostly former staff and students from the Westall secondary and primary schools. He has tried obtaining police and RAAF reports, but so far with little luck. The story was covered then by Channel Nine, The Age and local newspapers.

On the UFO, everyone seems to agree, Mr Ryan says. It was a low-flying, silver/grey shining object, either of classical flying saucer shape or close to it, “a cup turned upside down on a saucer”.

The students were familiar with light aircraft because the schools were close to Moorabbin Airport. Although the UFO was of similar size, “everyone said straight away that they knew it was not a plane”, Mr Ryan said, nor a weather balloon.

The object was in view for up to 20 minutes, and many saw it descend. Most agree it landed behind pine trees at the Grange Reserve. Dozens of students ran across what was then an open paddock to the reserve to investigate, but the object had lifted off and vanished.

Other details are sketchier. The UFO appears to have left a circle of scorched grass; others say several circles were left in paddocks bordering Grange Reserve.

Many witnesses, not all, report seeing aircraft, up to five, trailing the UFO. Some say it made no sound, others say it did.

Many reported that police/air force/military personnel inspected the site; some (not all) say the authorities burnt the site. The Dandenong Journal, for which the story was front-page news two weeks in a row, reported that “students and staff have been instructed to ‘talk to no-one’ about the incident”. Nevertheless, one teacher, Andrew Greenwood, gave the paper a detailed account.

“It was silvery-grey and seemed to thicken at times,” he said. “The thickening was similar to when a disc is turned a little to show the underside.”

One of the closest witnesses was a boy whose family leased land at Grange Reserve for horses.

Shaun Matthews (not a student at Westall) was on holidays and spending time on the land.

“I saw the thing come across the horizon and drop down behind the pine trees,” he told The Sunday Age this week. “I couldn’t tell you what it was. It certainly wasn’t a light aircraft or anything of the like …

“I saw the thing drop down behind the pine trees and saw it leave again. I couldn’t tell you how long it was there for, it was such a long time ago.”

Mr Matthews, 51 and now living in Greenvale, said the object “went up and off very very rapidly”.

“I went over and there was a circle in the clearing. It looked like it had been cooked or boiled, not burnt as I remember,” he said. “A heap of kids from Westall primary and high school came charging through to see what had happened — ‘look at this, look at that, we saw it as well’, that sort of thing. It was a bit of a talking point for a couple of days.”

Mr Matthews said the object, about the size of “two family cars”, passed him at a distance of about “four football fields”. “It was silvery, but it had a sort-of purple hue to it, very bright, but not bright enough that you couldn’t look at it,” he said.

“I saw that it dropped down behind the trees, and I thought, ‘hello, hang on’. A minute or so later, it went straight up, just gone.”

He said police and other officials interviewed his mother. But he cannot remember them burning the landing site, as others have alleged. And he did not see any light aircraft trailing the object, as others did.

“The way this thing moved there is no way it could have been a weather balloon or a light aircraft,” he said.

“A helicopter? No way — no noise, wrong shape, and it didn’t move like it. It came out of the distance, stopped, and then just dropped.

“It didn’t just sort of cruise and then slightly descend at an angle. It just stopped, dropped, and then went straight up.”

The top one was the case of Frederick Valentich, a 20-year-old Melbourne pilot whose light plane disappeared while flying over Bass Strait in 1978.

In the last minutes of radio communication, Valentich reported seeing a UFO hovering above his plane. He and his craft were never recovered.

“It’s pretty well documented,” Mr Cook said. “That’s probably the most important one because it involves the disappearance of a person.”

Mr Cook said the society’s stance on UFOs was that, “there are people out there seeing unusual things in the sky at times and they can’t be explained. But it’s a very big leap to go from unexplained things in the sky to extraterrestrials.”

Most witnesses, including Mr Matthews, say the UFO was not an aircraft or helicopter. But Westall is only six kilometres from Moorabbin Airport, and the object was roughly headed in that direction, travelling north to south.

“It sounds to me like some sort of experimental craft, very much Earth-based,” Steve Roberts, of Australian Skeptics, said.

“It is an interesting event with lots of witnesses and what we now call a crop circle.

“Accounts are confused. Some have the object landing and taking off again, others say ‘a paddock over which the object seemed to hover’.”

As well, “if there was a whole swag of officials investigating it, there must be an official report in RAAF archives somewhere”.

But Mr Ryan said that no one at the RAAF knew of the incident.

But given the history of the case — the way students and staff were told to keep quiet from the start — that was not surprising, he said.

“As I got a little bit older, I got a little more interested in the social and historical aspects of the story, how something like this could have happened and how it reflected society at the time, and how authorities responded to it,” he said.

“There’s been a layer of secrecy that was very, very prominent in this story from the beginning.”