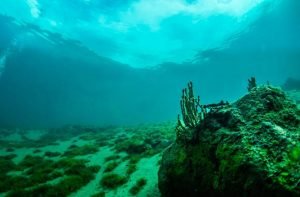 Hidden at the bottom of the Red Sea is a creepy saltwater lake where animals marinate alive. Scientists say that everything that gets into it “is instantly killed,” reports the Daily Star.

Professor Sam Purkis, a member of the University of Miami team that discovered the lake at a depth of 1,770 meters, explained that it is devoid of oxygen and contains lethal levels of salt, so any animal that enters the brine “is instantly killed.”

These underwater death traps that form in the deep ocean literally marinate animals alive. Researchers once found a crab in a lake that had been dead for eight years, but its soft tissues were still intact.

Salt lakes can also contain toxic chemicals such as hydrogen sulfide, making them even more dangerous. They contain three to eight times more concentrated saline than the surrounding ocean.

Speaking to Live Science, Purkis explained that the discovery could also help scientists figure out how the first oceans formed on our planet.

He said: “Our discovery of a rich community of microbes that survive extreme conditions could help trace the boundaries of life on Earth and could be applied to the search for life elsewhere in the solar system and beyond.”

“Until we understand the limits of life on Earth, it will be difficult to determine whether alien planets could harbor any living beings.”

Saltwater lakes are usually found on the ocean floor, where life generally does not thrive. However, they contain a “rich oasis of life”, despite the fact that they can kill all living things.

“At such great depths, there is usually not much life,” Purkis explained. “Nevertheless, seawater lakes are a rich oasis of life. Thick carpets of microbes support a diverse set of animals.”

Some creatures may use these salt water lakes. Mussels, for example, often line the edges of pools because they can use the methane found in brine pools and turn it into carbon sugar.