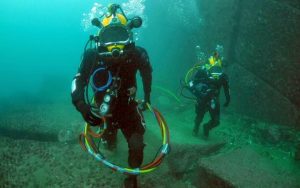 Near the coast of Great Britain, archaeologists discovered a mysterious object, which later turned out to be a very ancient shipyard on which ships were built. It is reported on the official website of the National Oceanographic Center in Southampton.

Underwater archaeologists have discovered fragments of a wooden platform near the Isle of Wight. According to the analysis, the discovered object is approximately 8000 years old.

It turns out that this shipyard was built by people who lived in the Stone Age. This is surprising, since for the people of that time the construction of ships was a real “technology from the future.” To date, scientists believed that the oldest shipyard is 5500 years old.

Scientists noted that ancient builders used modern wood processing technologies that could only appear after a few thousand years.

The discovered shipyard is located at a depth of 11 meters, but 8000 years ago there was a coast at this place.

For a more detailed analysis, archaeologists have created a 3D model of the oldest landscape of the construction site and the entire surrounding area.