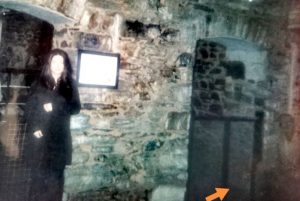 A frightening old man’s apparition has been captured on camera at one of Cornwall’s most iconic structures, according to a ghost hunter, reports cornwalllive.com.

Candice Collins, the head of the paranormal investigative organization The Cornish Ghost Whispers, can be seen inside Bodmin Jail in the photo below.

However, if you look to the right, you’ll notice a terrifying silhouette with a thin face and two enormous round eyes. The photograph was taken 15 years ago at an empty Bodmin Jail, but Candice lost it years ago during a house move.

She said: “I caught some fantastic paranormal evidence at Bodmin Jail before it was turned into a hotel. This was snap on a camera while walking around taking pictures. It’s a full body spirit of an old man in a suit with glasses and hair line that is in my photograph, when we were the only people there.

“I moved house shortly after taking the picture and lost it on the move. I looked everywhere for this picture for years couldn’t find in till I was going through an old folder yesterday and there it was. I was amazed to find it after all that time.”

Bodmin Jail, which was built in 1779 and closed in 1927, is located on the edge of Bodmin Moor in Cornwall, England, and has subsequently been converted into a hotel, museum, and gift store.

Its creepy reputation has attracted the attention of countless show ghost hunters, paranormal investigators, and others over the years seeking to experience something inexplicable.