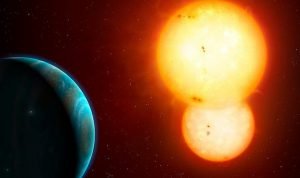 Planets with two suns, such as those in Star Wars, are not uncommon, especially on a cosmic scale. Three suns are much rarer, however, there are such cases. A recently discovered exoplanet is proof of this.

The question of how many suns a planet can have in principle is quite complicated. The fact is that the approximate distance at which the stars stop interacting is tens of thousands of astronomical units.

Within these limits, even very distant objects are bound by invisible forces, which are also constantly distorted due to the influence of black holes. However, an equilibrium point can theoretically be found.

The Polish astronomer, who back in 2007 calculated the location of the “three-sun” planet, believes that this is not surprising.

“As long as the companion stars do not interfere with the formation of the planet, such a system will be stable. I see no reason why, for example, five-star systems that are in gravitational equilibrium cannot exist, ” he believes.

American researchers cite our solar system as an example, in which there are many moons, but 9 satellites of Jupiter do not affect the earth in any way.

So the stars, being in the same system, may not have a devastating effect on their planet.

An alien was shot at an American base, says a former US Air Force major

Earth is experiencing the worst mass extinction since the dinosaurs