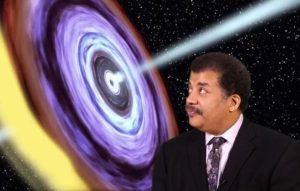 61-year-old astrophysicist Neil deGrasse Tyson, apparently is not afraid of his death, since he spoke about his readiness to die in a black hole. He noted that if he is offered such an opportunity, he will definitely agree.

Black holes are regions of space-time that arise after massive stars explode at the end of their lifespan. Black holes are still poorly understood, so Neil de Greiss Tyson’s dream is to be “smeared” in space and time. Astronomers know many black holes, one called Sagittarius A * sits right in the center of the Milky Way.

The scientist spoke about his wish in the Star Talk program.

Tyson thought for a long time about the problems of the Universe, including black holes. A man is not one of those who just wants to die. He noted that he would be happy if he had the opportunity to fly up to the black hole and visit it.

He will keep records until the moment when he ceases to exist as a person. The scientist wants his death to benefit science.

Stretching vertically and shrinking horizontally in a black hole (spaghettification effect) is a very brutal scenario, but Tyson is sure it will be worth it.