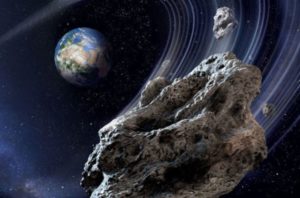 Scientists from the University of Hawaii at Manoa have studied the asteroid Apophis, which will come very close to our planet in the coming years. According to astronomers, an asteroid about 300 meters in diameter could collide with the Earth.

In the course of studies of a celestial body, scientists discovered the presence of the Yarkovsky effect, which occurs during temperature fluctuations on objects moving in space. On the one side, which is illuminated by the Sun, the asteroid heats up, and on the shadow side, on the contrary, it cools.

As a result of this physical phenomenon, the object has a weak reactive impulse, which can have a significant impact on the trajectory of movement.

It turns out that when scientists calculated the flight path of Apophis, this effect was not taken into account. When astronomers double-checked their calculations taking into account the Yarkovsky effect, they found that an asteroid collision with the Earth is possible. And this event will happen in 2068.

The first approach of a space body with our planet is expected on April 13, 2029. It will pass at the level of the orbit of satellites surrounding the Earth. In this case, the object will be clearly visible to the naked eye.

Scientists confidently stated that at the first approach in 2029, the asteroid Apophis will not collide with the Earth.

However, scientists are still worried about the fact that every year a cosmic body departs from orbit by 170 meters. This could ultimately lead to the asteroid falling on our planet, causing catastrophic events.