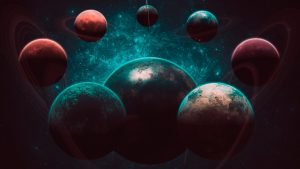 Astronomers have discovered a network of “cosmic superhighways” created by gravitational interactions in the solar system.

These channels allow objects to move quickly through space and can be used for space exploration and the exploration of comets and asteroids.

A team of researchers led by Nataa Todorovi of the Serbian Belgrade Astronomical Observatory analyzed observational data and found that these “superhighways” are made up of a series of connected arches in invisible structures.

These structures are called cosmic collectors by astronomers. Each planet generates its own sewers, which the researchers call a real celestial autobahn.

This network can transport objects from Jupiter to Neptune in decades, rather than hundreds of thousands or millions of years, as is often the case in the Solar System.

Scientists claim to have studied data from “millions of orbits in the solar system” to determine their interactions. The benefits of such research would go beyond the potential acceleration of space travel.

The study of these mechanisms can also help in the movement and control of potentially dangerous comets and asteroids.

Some researchers of the UFO phenomenon believe that the new discovery may provide an answer to the speed of UFOs in space. If the UFOs belong to an aliens, it is possible that they have known about the existence of cosmic superhighways for a long time and use them when moving around the universe.

Birds continue to die en masse: the cause of the death of animals is unknown