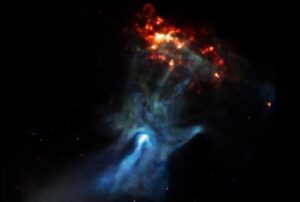 The gigantic “ghost hand” was created as a result of the death of a massive star due to a supernova explosion. It stretches through the depths of outer space.

The hand has thin, long fingers, which seem to be pressed against a luminous cloud. The pictures were taken by the Chandra Space X-ray Observatory, reports “Space”.

So far, little is known about this phenomenon. The so-called “hand” was formed when a supernova ripped apart a massive star. The explosion left a superdense stellar “corpse”, the so-called pulsar.

Something like a bubble of energetic particles formed around the pulsar. This structure, along with the debris of the star, took the shape of a human hand, stretching 150 light years. The photo shows how the “space limb” is reaching for the gas cloud RCW 89.

The remnant of the supernova arm was named MSH 15-52. It is located 17 thousand light years from Earth. Astronomers calculated the time after which the light from the explosion reached our planet. According to their calculations, this was about 1700 years ago, as the progenitor star ran out of fuel to support fusion, exploding its outer material into space, and collapsing its core.

The blast wave that begins at the fingertips of the hand moves at a speed of 14.5 million km / h. The substance in the center of the palm is moving even faster than 17.7 million km / h.

Chandra has been eyeing the cosmos in X-ray light for more than two decades. The telescope launched to Earth orbit aboard the space shuttle Columbia in July 1999.

Chandra is one of four NASA “Great Observatories,” which launched between 1990 and 2003.