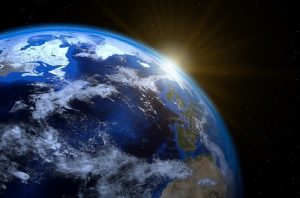 Recently, a group of scientists tried to find out if the Earth could be a living being.

Astrophysicists have explored the idea of ​​”planetary intelligence” and shared their findings in the International Journal of Astrobiology.

They believe that research into this issue can really help us solve the global problems we face as a species, and may even help in the search for extraterrestrial life.

So, can planet Earth really be a sentient being? The answer may actually be yes.

Pointing to evidence that underground networks of fungi can communicate, the researchers argue that large-scale networks of life may represent a giant invisible intelligence that is drastically affecting the state of the entire planet.

They also warn that humans are the main species causing change on the planet right now, and that by balancing between the plastic crisis and the climate, we can permanently impact the balance of the environment.

“We don’t yet have the capacity to act collectively for the planet,” said University of Rochester physics professor and paper co-author Adam Frank.

“We’re saying that the only technological civilizations are the ones that didn’t commit suicide, and they must have reached the stage of true planetary intelligence,” Frank added.

“That’s the strength of this line of research,” he said. “It combines what we need to know to survive the climate crisis with what could happen on any planet where life and intelligence exist.”

It is possible that the hypothesis based on planetary intelligence may soon be confirmed.

If there is a collective body of knowledge that is created in space and time and transferred from one species to another, then the concept of its self-organizing functioning is likely to be correct.

In other words, if people considered the Earth to be a living being, then they would probably be more attentive to the consequences of their actions.