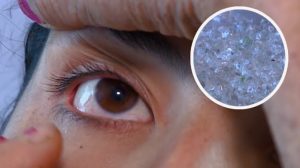 Satenik Ghazaryan, an 22-year-old Armenian girl, was found to have an unusual disease. Real crystals come out of her eyes.

Every day, small crystals are removed from the girl’s eyes, which can form up to 30 pieces per day. According to the girl, her life turned into a real hell.

Deputy Minister of Health Hovhannes Harutyunyan said that in the near future the assembled council of doctors will discuss the causes of this disease and prescribe appropriate treatment.

Doctors gave the girl a preliminary diagnosis – cystinosis, which indicates an inborn violation of the metabolism of amino acids, while cystine crystals form in the body.

It is known that this case is not unique in the world: similar diseases were noted in Lebanon and Brazil.