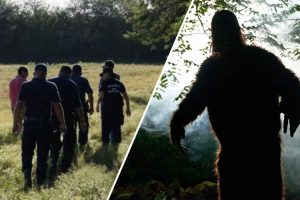 Strange events are unfolding right now in the Argentinean city of Kines, the province of San Luis. After reports from eyewitnesses about the observation of the “big black monkey”, the police began an active search for this creature.

It all started on March 10, 2019, when the inhabitants of the rural community noticed a large black creature that moved on two legs as a person and was about 180 cm tall.

One eyewitness, in particular, said that he saw how this creature easily jumped over a high fence with barbed wire. He also added that he had seen such incredible jumps only at “Olympic athletes”.

When these reports reached the environmental police, firstly they decided that either a gorilla or some other large monkey escaped from a private zoo was there.

But when traces of this creature were found in the same countryside, they turned out to be completely different from the footprints of a chimpanzee or a gorilla. In shape, they looked like human feet, only larger in size.

“We don’t know what it is,” Marcelo Dias, head of the environmental police unit, honestly admits. “We have suspicions that these are still traces of some animal.”

For the first time, a strange creature was seen on Sunday evening at about 10 o’clock, when the owner of a small dairy farm went outside to the toilet. At a short distance from him, he saw a tall black creature, who immediately jumped over the fence with the ease of an athlete.

The next day, on Monday, a new message arrived when another farmer saw this black creature about 200 meters away and was surprised by his unusual gait.

“We found prints in two places, in the bushes and on the plain. They look like human ones, but they are large in size,” says Diaz. 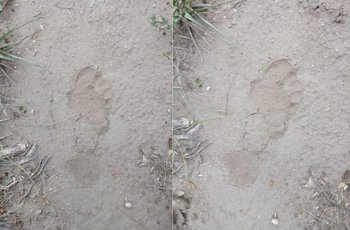 According to Diaz, there were no reports of missing large monkeys from private zoos, and he doubts that the gorilla could have escaped from some other city and made its way to Kines without attracting attention. Diaz also excludes that this could be a circus animal.

Therefore, it is not surprising that soon there was a rumor among the residents that the police were actually chasing the Bigfoot (Yeti). Especially believe it after finding traces that do not look like traces of chimpanzees or gorillas.

In the meantime, some locals are seriously afraid of this creature, be it a gorilla or something else. According to them, such a large creature can easily attack and maim children or adults.