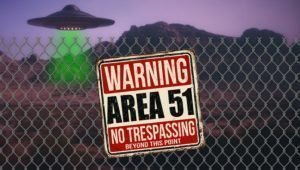 Area 51 is perhaps the most well-known center of UFO conspiracy theories in modern history. The site is the subject of many conspiracy theories covering a wide variety of topics including weather control, time travel, teleportation, and exotic propulsion systems.

Its most famous conspiracy theories, however, revolve around the idea that the base is used to study paranormal activity, UFO’s, and extra-terrestrial beings and technology. Much of the conspiracy comes from the level of secrecy the U.S government places on the location and the limited information that they have released.

Area 51 is the common name for a military base located in southern Nevada that is currently officially used for the development and testing of experimental aircraft and weapons systems. Other names for the location include Dreamland, Paradise Ranch, Home Base, Watertown Strip, and Groom Lake; most of which come from government documentation mentioning the base.

The airspace above the base is strictly restricted and though the base hosts multiple, long air strips, it isn’t used for incoming or outgoing flights. All of the aircraft testing at the base is classified and it isn’t until the aircraft is moved to another base that the information on the craft is made available.

This process of secrecy is directly for at least claimed UFO sighting. During the development of the OXCART, many claiming to see a UFO had simply seen the experimental craft. OXCART was made of titanium alloy and the fuselage had a wide, round shape.

The craft could travel at speeds of 2,000 mph, naturally generating some interest in the object. The truth about the craft came when it was declassified, but there are still many conspiracies surrounding the base.

Many of the conspiracies suggest that the true work of Area 51 is done in underground bases, hidden from any standard visual aids. It is said that an underground facility is used to test out alien technologies and even testing on alien creatures. One of the most prominent theories is that there is an underground system of railroads that spans transcontinental area.

There is also a theory of a disappearing airstrip nicknamed “Cheshire Airstrip” after Lewis Caroll’s Cheshire Cat in Alice’s Adventures in Wonderland. The strip becomes visible when water is sprayed onto its camouflaged asphalt.

Other theories suggest that the facility is used to study and reverse engineer alien technologies, including aircraft. While there is denial (or lack of admission) of alien technologies, there are some sources that verify a few of the rumors about Area 51.

Officially, veterans of the OXCART project and the NERVA project (a nuclear thermal rocket engine) agree that the projects were the source of much of the conspiracy about the facility being used for UFO research.

The technologies in both systems, and the frequent testing, 2850 test flights alone for the OXCART, made them both visible and very shocking to those that saw them. Though they don’t mention the theory of extra-terrestrial research, they do acknowledge that most of the work done at Area 51 is done underground.

They also deny the existence of an underground railroad system. But a few people have come forward over the years with information on projects that they worked on at the facility that tend to give credence to conspiracy theorists.

Bob Lazar claimed to work at the underground facility and that he was contracted to work on alien spacecraft that the United States government had come into possession of. Bruce Burgess directed a documentary in 1996 entitled Dreamland, which included an interview with a 71 year old mechanical engineer claiming to have working at Area 51 in the 1950’s.

The engineer said that they developed a flying disk simulator based on a disc originating from a crashed extraterrestrial craft that was used to train US pilots. Another claim of his was that he had worked with an extraterrestrial being by the name of “J-Rod” who was a telepathic translator.

Many other UFO and extraterrestrial theories crop up about the location due to the extreme secrecy that the government treats with any information regarding to the location. The base doesn’t show up on any public U.S. federal maps and land near the base has been systematically purchased, slowly limiting the possible view of the base.

Unlike most of the surrounding area, the base is permanently off-limits to both civilian and normal military air traffic. The base is technically owned by private contractors and susceptible to taxes, but they base only declares a $2 million taxable value to the tax assessor, who is not allowed to enter the area to perform an assessment. All of these details help to fuel the conspiracies surrounding this mysterious base.

UFOs Are Already a Fact, But What About Alien Implants?