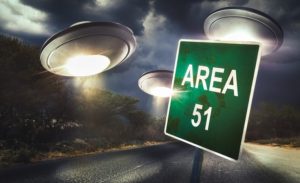 One million social media users have been warned against storming the secret base.

The controversial venture, scheduled to take place at 3 am on September 20. The ill-advised plan was first posted on Facebook under the title ‘Storm Area 51, They Can’t Stop All of Us,’ which seeks to discover proof of aliens at the base.

We reported 185,000 individuals signing up last week, but this has increased to over 1 million since then.

The government predictably doesn’t want such a thing to occur and has issued a warning against these UFO enthusiasts, stating “the military will be waiting..”

“[Area 51] is an open training range for the US Air Force, and we would discourage anyone from trying to come into the area where we train American armed forces,” said spokesperson Laura McAndrews.

“The US Air Force always stands ready to protect America and its assets.”

However, it stays unclear exactly what this will mean for those who do occur to appear on the day.

What will the Air Force do with such a big number of individuals in the region? While the first goal will obviously be a peaceful resolution, talking doesn’t seem to influence any of these boys who have their hearts set to uncover the truth about Area 51.

The next step would be lethal force-will the U.S. government in cold blood really slaughter over a million people?