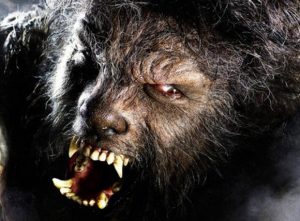 A werewolf, also known as a lycanthrope is a human with the ability to shapeshift into a wolf or a therianthropic hybrid wolf-like creature, either purposely or after being placed under a curse or affliction (e.g. via a bite or scratch from another werewolf).

This transformation is often associated with the appearance of the full moon, as popularly noted by the medieval chronicler Gervase of Tilbury, although it may have been recognized in earlier times among the ancient Greeks through the writings of Petronius.

Werewolves are often granted extra-human strength and senses, far beyond those of both wolves or men. The werewolf is generally held as a European character, although its lore spread through the world in later times.

Shape-shifters, similar to werewolves, are common in tales from all over the world, most notably amongst the American Indians, though most of them involve animal forms other than wolves. This type of transformation—from a squeamish human into a predatory animal— may well have been the preserve of Shamanism and ritual amongst our prehistoric ancestors.

Perhaps the Shaman, in the course of such a ritual, may have adopted the animus of a wild animal, may have worn its skin, and may even have appeared animal-like. The first usage of the word “werewolf ” occurs in English and in a Biblical context. It is referenced in the Ecclesiastical Ordinances of Cnut, a Danish king who ruled a great part of England between 1017 and 1035.

The term “wehrwulf ” is used in a passage that has little connection with a human transforming into a wolf. The text involved is Matthew 7:15. “Beware of false prophets, which come to you in sheep’s clothing, but inwardly they are ravening wolves.”

The author of the Ordnance—intriguingly named Wulfstan—urges both priests and bishops to be vigilant in protecting their flocks (congregation) “in order that the ravening werewolf should not too widely devastate their spiritual flocks.

In his exposition, the holy man uses the rare Saxon term “wodfreca” (wod meaning “bold” and freca meaning “grasping” or “greedy” alongside the term “wehrwulf.” This has been translated by some scholars as the Saxon equivalent of berserker—a wild, vicious man who lived in the woods.

By using the adjective wodfreca,Wulfstan drew a clear connection between the unchristian person and the wild ravening animal. Later in Saxon England, the term was used to describe any form of outlaw or outcast.

These people were associated with viciousness and bloody slaughter; a butcher who gave no mercy. The notion of the wild, wolfish man was becoming deeply entrenched in Christian as well as Pagan mythology.

One of the most celebrated werewolf cases of the late 16th century was that of Peter Stubb (alternately spelt Stubbe, Stumpf, or Stube), the werewolf of Cologne, Germany, whose trial took place in 1589.

The widespread knowledge of the case can be attributed to the pamphlets, detailing many of his horrendous crimes, that circulated throughout Europe, and were translated into a number of languages.

A number of learned writers of the time, such as Martin Del Rio, subsequently made comments on the case, adding to its notoriety. Witchcraft was involved in the transformation—the dark powers centering around a magic belt with which, by buckling it around his waist, Stubb could transform himself into a ravening wolf.

He was described in A True Discourse Declaring the Damnable Life and Death of One Stubbe Peter,” an anonymous pamphlet published in 1590, as “strong and mighty, with eyes great and large, that in the night sparkled like brands of fire; a mouth great and wide, with the most sharp and cruel teeth; a huge body and mighty paws.

And no sooner would he put off the same girdle, but presently he should appear in his former shape, according to the proportion of a man as if he had never been changed.”

Whilst in his wolf shape, Stubb was incredibly ferocious, viciously attacking a number of people who crossed his path and then escaping into the surrounding countryside, easily outdistancing the hounds that were sent after him.

It was alleged that his first choice of prey, whilst in the wolf shape, was human but if he could not find any, he would attack the sheep and cattle of his neighbours. He had, it was stated, murdered no less than thirteen young children and savaged at least two pregnant women, ripping the unborn babies from their wombs in order to devour them.

The horror of his attacks could not be overemphasized. In addition to these bestial crimes, he was accused of incest with both his sister and daughter, and of actually murdering his own son whilst in human form and of eating the boy’s brains in order to staunch “his greedy appetite.”

Whilst in his wolf-form, Stubb was cornered in some fields near the town of Bedbur by a pack of hounds that had been sent against him. In order to elude them, he removed the magic belt and appeared simply as an ordinary traveler, walking towards the town and leaning on his staff.

But those who were following the hounds claimed that they had never taken their eyes from the wolf and had seen the miraculous transformation. Stubb was arrested and, under strict torture, gave a full account of his abominable life.

The magic belt, however, was not found and (under torture) Stubb admitted to having abandoned it “in a certain valley,” just before he had been captured. The valley was searched but nothing was discovered and it was assumed that the Devil (whose servant Stubb was supposed to be) had reclaimed it.

Stubb’s case had now become so celebrated that he could not escape the full rigor of the law. Every horrid detail of the affair had shocked the populace of Germany and beyond. He was sentenced to be strapped to a wheel and large sections of his flesh were ripped from the bone using red-hot pliers.

His arms and legs were then smashed with a wooden axe, after which he was finally decapitated and his corpse was burnt on the same pyre as those of his daughter and mistress, who had also been executed for their crimes.

After the execution, a memorial was set up in Bedbur consisting of a long pole pushed through the broken execution wheel and with the likeness of a wolf, framed in wood near its summit.

On the very top, however, Stubb’s head was impaled as a warning to all who might be tempted to follow him and take on the guise of a wolf. Around this grisly reminder were hung sixteen pieces of wood, representing the sixteen victims whom Stubb was alleged to have murdered as a werewolf.

Although this German werewolf was perhaps the best known, it was in France that many of the trials for lycanthropy occurred. Indeed, contemporary with and even before Stubb was brought to trial in Bedbur, there were several notable French trials, including that of the famous Gilles Garnier.

Gilles Garnier, the “hermit of St. Bonnot,” ranks as one of the earliest and most famous French werewolves. During the early 1570s, he was dwelling in great poverty, along with his wife in the rough and wooded countryside of Armanges, near the town of Dole. He was not a native of the area, having initially come from Lyon, and he was considered odd and rather belligerent in his ways.

About the time he came to live at Armanges, a large wolf began to prey on the flocks of local shepherds, spreading fear and alarm. Additionally, several children were carried off to be devoured in the forest—witnesses claimed that a werewolf was responsible. As time passed, such attacks became more and more frequent, to the alarm of many of the parents in the area.

Naturally, suspicion fell upon the surly anti-social hermit dwelling in the woods, but there was not enough concrete evidence to confront him. However, the local parlement (governing body) did take some action.

It issued a proclamation that the populace should assemble with pikes, arquebuses, sticks, and halberds to hunt, seize, and kill the werewolf. The vigilante assembly soon hunted down its prey in November 1573.

It was reported that a little girl was rescued from the jaws of a wolf in La Poupee meadow, between Authune and Chastenoy. She had been badly mauled by the creature and her shocked rescuers thought that they recognized human features on the wolf as they drove it off.

For many, the animal bore an uncanny resemblance to the misanthropic hermit of St. Bonnot. The parlement at Dole ordered that he be arrested and questioned. Garnier’s confession (perhaps elicited under torture) gave a graphic and horrifying account of his activities as a werewolf.

Much of the gruesome details concerned the murder and devouring of two children in particular—two boys, ages ten and twelve years of age, one of whom he had killed in the locality of Dole and the other (in August 1570) in a pear-orchard near the village of Perrouze.

In this latter case, he had been driven off (still in his wolf form) by the approach of some laborers. In that same October, he had also killed a ten-year-old girl in a wood known as La Serre about a mile or so from Dole. He claimed that he found her flesh “especially sweet” and took some of it home for his wife to eat.

Unlike Stubb, however, Garnier was slightly vague about how he actually transformed himself into an animal. There was no magic belt given to him by the Devil. Rather he seems to have become a wolf through “sorcery” and in most of his evidence, he speaks of “strangling” his victims whilst in his werewolfguise.

Could it be possible that the weak-minded and confused Garnier simply imagined that he became a wolf in order to commit several murders?

It is also possible that cannibalism may have been common in some of the more remote parts of Europe than is perhaps commonly supposed, and that the wretched Garnier and his wife might have given in to such abnormal urges in order to survive.

Such mental niceties, however, were not taken into account by the officials in Dole, who eventually found the hermit guilty of the most ghastly of werewolf crimes.

Ironically, he was not offered the mercy of strangulation before his body was completely burned—an unusually harsh punishment that was said to reflect the awfulness of his offences. It probably also reflected a wide-spread fear of a beast lurking within the midst of a civilized community.

Some modern researchers have tried to explain the reports of werewolf behaviour with recognised medical conditions.

Dr Lee Illis of Guy’s Hospital in London wrote a paper in 1963 entitled On Porphyria and the Aetiology of Werewolves, in which he argues that historical accounts on werewolves could have in fact been referring to victims of congenital porphyria, stating how the symptoms of photosensitivity, reddish teeth and psychosis could have been grounds for accusing a sufferer of being a werewolf.

Others have pointed out the possibility of historical werewolves having been sufferers of hypertrichosis, a hereditary condition manifesting itself in excessive hair growth.

And even in today’s relatively sophisticated society, a fear of the beast still lingers. It is not a great distance in many instances, from the thronging streets of a busy city to the cool of the remote and shadowy forest.

And who knows what lurks in the dappled shade under the low boughs—a crouching beast, waiting to strike and to tear us limb from limb. Werewolves may be far closer to us than we would prefer.