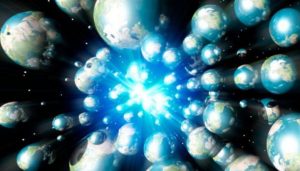 The universe is a pretty big place, but what if there’s even more to it than we thought? After all, we are infinite beings with infinite potential and possibilities. Could there also be infinite universes? Are we, in fact, living in a multiverse?

On the spiritual side of things, we know that there are infinite possibilities, but it looks like science is noticing it too. Simply put, our universe is hypothetically just one of an infinite number of universes that comprise a greater “multiverse,” sometimes called a “meta-verse.” There could be hidden or parallel universes existing right within our own universe!

Interestingly this concept is nothing new. It has already been hinted at in history, science fiction and even psychology. Terms like alternate universe, parallel worlds, alternative realities and dimensional planes have all been used to describe this idea.

What Science Has to Say

Physicists in particular, disagree on the theory of a multiverse—after all it’s still considered a hypothesis. Some argue that it doesn’t exist, and others consider it unworthy of study! Yet, one of the most famous of theoretical physicists (and cosmologists), Stephen Hawking, definitely supports the multiverse theory.

There are plausible assumptions that we do live in a multiverse based on ideas about the space-time continuum, quantum mechanics and mathematics. But you didn’t come here to read about the intricate details of scientific speculation; you want to know how this potential multiverse affects you.

What the Multiverse Means to You

Being spiritually savvy, you already know that there are other dimensions such as the astral plane, the fifth dimension and beyond. For all intents and purposes we could consider these multiverses.

We also know, spiritually speaking, that there really is no such thing as “time,” since we really exist in the eternal now. Basically, that means we can exist anywhere and everywhere all at the same time!

Think about spirits, yogis and ascended masters like Babaji who could bi-locate, whenever and wherever they wanted. Sounds like a multiverse concept, doesn’t it?

The bottom line is, whether science proves it or not, we already know that spiritually we are infinite and eternal. That means in essence, we are multidimensional beings living in a multiverse.

We can take our consciousness anywhere it wants to go—including realms beyond our wildest dreams!

Why Are We Unable To Remember Being Born?