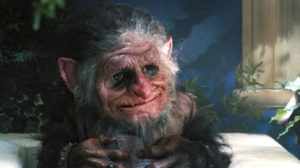 While Christmas is often a warm and fuzzy sort of time, that is certainly not always the case. Sometimes, the happy holiday turns into an experience in terror, memories of which can last a lifetime. 11-year-old Bobby May had just such an experience while spending the Christmas holiday with his grandparents in London.

The home Bobby’s grandparents lived in was an old one. It was actually the second time they had lived in the house. After living elsewhere for several years, the grandparents had just recently moved back into the home. Nothing strange had ever happened there before, but that was about to change.

Finally the day Bobby had been waiting for arrived, December 24th, Christmas Eve. He had happily gone to bed early with anticipation of the gifts that he would soon receive. His grandparents were very generous, but he really only wanted one thing, an Etch-A-Sketch. Bobby quickly fell asleep but woke at about 4:00 am

He woke to a familiar sound, his grandparents snoring loudly. As he sat up he could see a pile of presents were now at the foot of his bed. His first instinct was to open them immediately but he resisted. Bobby knew how much his grandparents enjoyed watching him open his gifts. He laid back down and began to fall back asleep when he heard something.

It sounded like at least one of his grandparents had entered his room and were arranging, or perhaps adding, to his stack of gifts. He stayed still, not wanting to interrupt his personal Santa. But how could that be? The snoring from his grandparents room continued and he could clearly hear that it was coming from two people. So what was it at the foot of his bed?

Despite a quickly growing feeling of fear, Bobby just had to look, what he saw was something he didn’t even believe in. It was a small creature with brownish wrinkled skin, no hair, black eyes and just a slit for a mouth. He knew what it was, he had seen pictures of them, it was a Troll. The Troll, which had been slightly bent over, then stood fully upright. It seemed to be interested in one of Bobby’s presents, which it held in its hands. The Troll then turned its head, looking directly at the horrified 11-year-old.

The bizarre creature appeared to smile. Then it was gone, with the sound of rushing air and a very loud bang the Troll had vanished. Bobby screamed and within seconds his grandfather was in his room. Both then heard something moving around the downstairs. The grandfather went to investigate with bobby trailing behind. The back door of the home, which had been locked, was standing open. Scattered around the living room was torn wrapping paper and lying on the floor, near the back door, an Etch-A-Sketch.

Was this story just a case of a boy having a nightmare combined with a home break in? Perhaps so. Nevertheless, Bobby, who went on to serve in combat while in the military, says that his encounter with a Troll many years ago, was the scariest thing that ever happened to him.