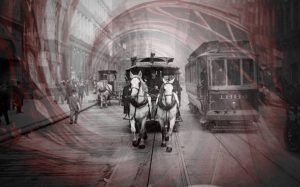 When in her early twenty’s, Susan Smit was in need of a part-time job, it didn’t take her long to find one. Like countless people before her, she was soon attaching the Domino’s Pizza sign to the top of her car. Her and her parents fears that she could be robbed, raped or killed, thankfully never became a reality. One delivery however, did turn into a terrifying and unexplained event that continues to haunt her.

Susan recalls the night as a very dark and rainy one. The store received an order and Susan was to deliver it. The location was not far, she grabbed the pizza and was on her way. As she neared the delivery, she couldn’t find the street. The darkness and increasingly heavy rain didn’t help but she was persistent. After a few minutes of driving up and down the road she found it. She turned onto a small dirt road and could see the lights of a house in the distance.

The road had become mud causing her to drive very slowly but she was getting closer and could see a very large home with lights on in the second floor. As she stopped in front of the house the rain seemed to let up. She grabbed the pizza and went to the front door. After knocking on the door, Susan noticed that the home was in very poor condition. She thought it was a shame, as the home must have been beautiful at one time.

After knocking a couple more times and getting no response, she went to the back door and knocked again. She could see figures moving on the second floor but no one answered the door. Susan then took out her cell phone and called the number that had placed the order. The number was not in service. She began to get scared and headed back to her car.

As she was turning her car around to leave, she noticed another large building a couple of hundred yards away. She immediately recognized it was, to her horror, a slaughterhouse. She drove as fast as she could on the muddy road and made it safely back to the main street. She drove straight home, not even returning to the store, trying to figure out what had happened.

Arriving home she told her parents of the bizarre event. Her family had lived in the town all of their lives but did not recall a slaughterhouse in the area. Her father, in an effort to calm his daughter, offered to go with her the next day to see for himself.

The next day was sunny and clear, yet Susan and her father still had difficulty finding the dirt road leading to the old house. Eventually they found it, but the scene was nothing like what Susan had described. There was no large house or any other buildings. Just an empty lot, with some old rusted machinery, the kind that may have been used in a slaughterhouse many years before.