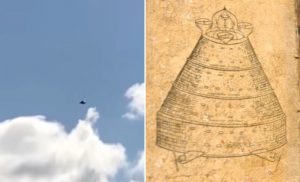 In April 2021, an eyewitness managed to film in good quality a large UFO near the city of Mexico City. The mysterious object turned out to be close to the mythical flying machines of the “Gods” from ancient scriptures called “Vimanas”.

Archaeologists in Mexico have previously found many drawings and clay statues similar to UFOs. If a real Vimana was noticed in the sky over Mexico City, then it turns out that the ancient Gods returned?

The so-called vimanas could develop incredible speed, and on board could carry the powerful weapon of the ancient Gods. Some texts even describe the construction of the Vimana Gods’ aircraft and the pilot’s manual.

The word Viman consists of two words. “Vi” means the sky and “Man” means a person, when you put these two words together, you get a person in the sky.

It is believed that the local peoples of antiquity tried to portray aircraft in this way. On which once upon a time the “Gods” flew from distant stars…