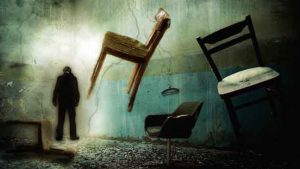 Poltergeists, PGs, manifestations of PK, have entity agents, EAPs, and human agents, HAPs. The former has intelligence and a more sophisticated range of antics.

Poltergeist, a German word, means “noisy ghost.” Typical poltergeist activity includes rappings, knockings, throwing and breaking objects, stone tossing, and/or disappearing and reappearing objects, found where they had been placed or in new strange ones.

This theory maintains PGs are manifestations of malevolent, mischievous spirits or energy, which in itself is fallacious in that spirits’ existence is acknowledged. Other fallacies, according to parapsychological standards, include:

Ghost is popular vernacular all inclusive word for apparitions, hauntings and poltergeists. Poltergeists are phenomena manifested by PK. Admittedly, there are some extremely rare documented cases that are classified as “demonic” or evil.

The erroneous “definitions” given differ from those of prestigious parapsychological organizations, including the Parapsychological Association, affiliated with the AAAS, American Association for the Advancement of Science, an international non-profit organization dedicated to advancing science. Equally fallacious is the proposed theory that poltergeists aren’t ghosts.

– Apparitions are, according to survival theory, that part of the human and animal that survives death of the physical body. They can be seen, heard, felt by touch or bodily sensation, smelled, tasted or sensed and have intelligence.

– A haunting differs because it has no intelligence. It’s energy imprinted in time and space. Apparitions and a haunting are collectively referred to as hauntings.

– It isn’t difficult to ascertain the difference between poltergeists and hauntings.

– Parapsychologists recognize the existence of the EAP as a ghost and acknowledge HAPs exist. Both are extraordinary human experiences, therefore classify as psychic phenomena.

– Parapsychology, like some aspects of psychology, is a theoretical science. Chemistry is a science that’s provable by the scientific method. Mixing two hydrogen molecules with one of oxygen always produces water. “Para,” in the scientific connotation, is phenomena that are inexplicable by the known laws of science.

– Psi cannot be measured, weighed or always duplicated in labs with the same results continually repeated

– Documented and authenticated accounts of credible experients
– Photographs
– Video tapes
– Electronic Voice Phenomena, EVP, audio recordings, temperature changes and Electro-Magnetic Fields, EMF
– Cryptids, animals whose existence is not recognized scientifically by zoologists and biologists, have been documented by pictures and casts of footprints, hair and scat samples as well as photographs of the animals.

Developing Your Own Psychic Gifts: Clairaudience

A Guide to Out of Body Experiences: Astral Plane and Alternate Dimensions