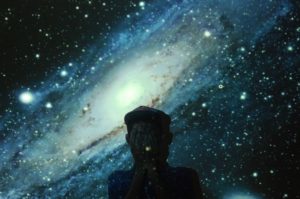 The European Southern Observatory (ESO) announced the discovery of a star 127 light years from Earth confirming a Sun, similar to our own Sun, with five or even seven planets, located in the constellation Hydra. The light from designated HD10180 left that system 127 million years ago.

One of these planets is similar to Saturn and contains a planet 1.5x the size of our Earth. This find ensures the search for extra-solar life is reinvigorated.

SETI, the Search for Extra Terrestrial Intelligence, lasted from 1992 until funding ran out in 1993. Private funding continued the search. During 40 years of searching, based on the radio signal of hydrogen (1.42GHz) there has been silence.

The numbers could vary from one, mankind, to millions of such communities in our Milky Way galaxy alone.

The Andromeda Galaxy (M31) is a similar galaxy to our own Milky Way galaxy and is composed of 300 billion stars at 4.2 light years away which means that light left Andromeda 4.2 million years ago when mankind did not exist.

This galaxy was the subject of close observation because our Sun and Alpha Centauri are similar in size and it was expected to have attendant orbiting planets which disappointingly they did not. This star is observed in the constellation Centaurus in the southern hemisphere.

The Earth is only 4.6 billion years old yet there are galaxies some 12 billion years old which are readily observable where civilization could have developed three times over and had sufficient time to colonise other worlds, even our own.

The unimaginable size of our own Milky Way galaxy limits contact with other galaxies solely to visual, infrared or radio telescope telemetry. If mankind could travel at the speed of light it would take 100,000 years to cross our galaxy which contains 200 billion stars.

The Earth is a typical planet orbiting a typical Sun in a typical galaxy. Copernicus proved the Earth is not the centre of the Universe. The high degree of improbability of the formation of life renders it almost miraculous.

The Kepler satellite discovered at least 4100 extra-solar planets, since 2008, within two years of deployment, using a photometer to measure the wobble of a star as a planet orbits its extra-solar system of which 350 newly discovered planets will be subject to closer examination.

The discovery of exoplanets has intensified interest in the search for extraterrestrial life. There is special interest in planets that orbit in a star’s habitable zone, where it is possible for liquid water, a prerequisite for life on Earth, to exist on the surface.

The study of planetary habitability also considers a wide range of other factors in determining the suitability of a planet for hosting life.

The panspermia theory determines that life may have developed elsewhere in the galaxy and fallen to Earth from space or from Mars which was a viable ecosystem 3.5 billion years ago.

Life may yet be found under the surface of Mar’s polar ice caps. Extraterrestrial life may not have an independent origin. Mankind is composed of carbon, nitrogen, oxygen and hydrogen which are produced in supernovae explosions.

So, we are made of stardust. Mankind lives in a stable Hubble Space Telescope region of space. The laws of physics may vary beyond the Hubble Space region where the actions of black holes, supernovae and asteroid bombardments may not allow life to develop in distant chaotic regions of the Universe.

We are not alone. Statistically, life could develop in many parts of the Universe. It is said that only intelligent beings could deny the existence of life elsewhere in our Universe over 3 billion years.

An alien artifact left on Earth or some link with a far distant galaxy could suddenly expose mankind to alien contact. This is only a matter of time.

What are Alien Implants?