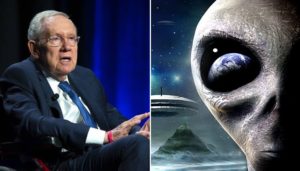 Former Senate Majority Leader Harry Reid has declared that he believes in extraterrestrial life, insisting the government should do more to investigate Unidentified Flying Objects (UFOs).

“The world as we know it today is extremely large. It’s so big I can’t comprehend it,” Mr Reid said in an interview with Vice.

Former Senator has developed two Pentagon projects made to look for and study UFOs, unidentified aerial phenomena, and advanced propulsion technologies. He has consistently forced the government to do more to investigate UFOs.

“The sad part about it is no one else has done anything,” Mr Reid said on the CYBER podcast “There’s no one doing anything and that’s too bad.”

“I think that we need to fully understand this and have no boundaries on what we look for,” Reid told.

“And I repeat now for the second or third time that people should not be afraid. I think that too many of my legislative friends are afraid to go into this because someone will think that they’re some kind of a nutcase. But I went into it and I don’t think it hurt me politically,” he added.

Why in recent times, more and more politicians have begun to say that aliens exist and the UFO phenomenon is real? Is it time for truth?

From a secret underground base in Antarctica something alive has escaped