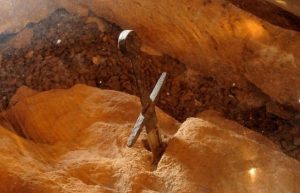 An ancient artifact – the blade of the fallen leader fell into the hands of archaeologists. Historians from England arrived at the place where the unique artifact was discovered and recognized the legendary sword.

Scientists believe that the legend of King Arthur was borrowed by the Saxons from Italians. The Sienese knight Galgano Guidotti in 1148 thrust his sword in exactly the same way into a stone near an ancient abbey.

Archaeologists have found this very sword, while being at a loss due to the striking resemblance to the legendary sword.

For hundreds of years, the ancient sword was considered a fake, but thanks to modern technology, it was possible to establish its age.

Scientists cannot understand who actually owned this sword and how it was possible to stick a steel sword into granite.