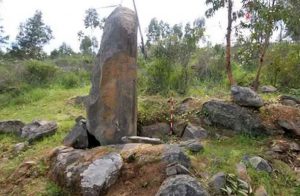 In the Spanish province of Huelva, a prehistoric megalithic monument has been discovered, which, according to archaeologists, is the largest object of its type in Europe. According to The Guardian, this is a huge complex of more than 500 standing stones.

On the site near the Guadiana River, it was planned to create an avocado plantation, so the area was subject to archaeological study. Upon arrival, scientists discovered ancient standing stones.

According to archaeologist José Antonio Linares from the University of Huelva, scientists have found a huge collection of different standing stones, the oldest of which, according to preliminary dating, appeared here in the second half of the 6th millennium BC.

“We counted 526 stones that stand or lie on the ground. The height of the stones varies in the range of 1-3 meters,” the scientist noted.

Most of the stones are combined into 26 rows and 2 cromlechs, which are arranged taking into account astronomical factors.

“The stones stand on the tops of the hills so as to point to the east, where the sun rises.

In addition, it is obvious that the stones were used to observe the summer and winter solstices,” added Jose Antonio Linares.

It is amazing that more than 8000 years ago, people were already interested in space and astronomy.

Hundreds of birds die in Wales under unexplained circumstances