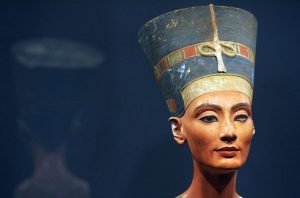 The Egyptian queen Nefertiti, with her thin neck, large eyes and high cheekbones, has long been considered the epitome of feminine beauty. Now archaeologists may be close to identifying her mummy and revealing the true identity of the monarch.

Egyptologist Zahi Hawass, former Egyptian Minister of State for Antiquities, excavated tombs called KV21 and KV35 in the Valley of the Kings, in present-day Luxor.

He found two mummies and believes that one of them belongs to Nefertiti, and the other to her daughter, Ankhesenamun, Tutankhamun’s wife.

Professor Hawass told Newsweek: “In October we will be able to announce the discovery of the mummy of Ankhesenamun, Tutankhamun’s wife, and her mother Nefertiti. I am sure that I will reveal which of the two unnamed mummies could be Nefertiti.“

Dr. Hawass said that if DNA analysis definitively identifies the mummy of Nefertiti, then Egyptian scientists will conduct a CT scan of the head and “reveal the most complete and accurate image of the queen.”

Nefertiti ruled during the 18th dynasty of Egypt and lived between about 1370 and 1330 BC, when Egypt was the most powerful and prosperous state. But the queen died during a period of social upheaval, due to which her burial place was lost.

She ruled with her husband Amenhotep IV, who transformed the country from polytheism to a monotheistic cult dedicated to the sun disk named Aten. Amenhotep changed his name to Akhenaten, which means “beneficial to the Aten.”

The changes of the pharaoh did not take root, and after the death of his father, Tutankhamun “returned” the old gods, and destroyed the monuments associated with Akhenaten.