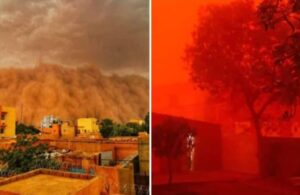 On May 23, an afternoon apocalyptic sandstorm engulfed the province of Naâma in Algeria, changing day into night and coloring the sky BLOOD RED, reports strangesounds.org.

Even residents say the extreme weather phenomenon was unprecedented in the region.

Cars had to put their lights on as the wall of dust engulfed the city of Naâma, changing day into night. Some had to stop driving due to the disastrous weather conditions.

This was not a bad MARS sci-fi movie but a real and scary weather phenomenon on Earth.

A dust storm, also called sandstorm, is a meteorological phenomenon common in arid and semi-arid regions. Dust storms arise when a gust front or other strong wind blows loose sand and dirt from a dry surface.

Fine particles are transported by saltation and suspension, a process that moves soil from one place and deposits it in another.