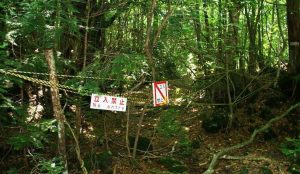 Aokigahara is a 35-square kilometer forest, also known as the Sea of Trees, which lies at the northwest base of Mount Fuji in Japan. It is known for being extremely quiet due to wind-blocking density of the trees and the fact that it is free of wildlife.

There are numerous rocky, icy caverns throughout the forest, some of which attract tourist attention. While the forest was historically associated with demons in Japanese mythology, more recently it’s become known for another phenomenon. Despite numerous warning signs, in both Japanese and English, urging people to reconsider the action, the site has become a popular place for suicides.

In Japan, the forest is the most popular place for suicides. It is only second to San Francisco’s Golden Gate Bridge in the number of total suicides for a single location. The statistics vary by source, but during the period leading up to 1988, about 100 suicides were recorded there every year.

In 2002, 78 bodies were found within the forest during the annual body hunt, exceeding the previous official record of 74 in 1998. The following year that number climbed to 100, prompting the local government to stop publicizing the numbers in a futile attempt to disassociate Aokigahara with suicide.

Suicide attempts in the forest are said to increase during the month of March, which is the end of the fiscal year in Japan. As of 2011, the most popular means of attempting suicide were recorded to be hanging and overdosing with various drugs.

Some have attributed the popularity of suicide at Aokigahara to the 1960 novel “Tower of Waves” by Seichō Matsumoto, which ends with two lovers committing suicide in the forest. However, the suicides in the forest predate the publication of the novel and the place has been associated with death for ages.

For example, an ancient Japanese custom called Ubasute refers to an ancient custom allegedly practiced in Japan’s distant past that is said to have possibly continued in the forest into the late 19th century. In this practice, the old and infirmed would be carried into the forest other remote place and left to die. Aokigahara is rumored to have been a popular location for the practice. 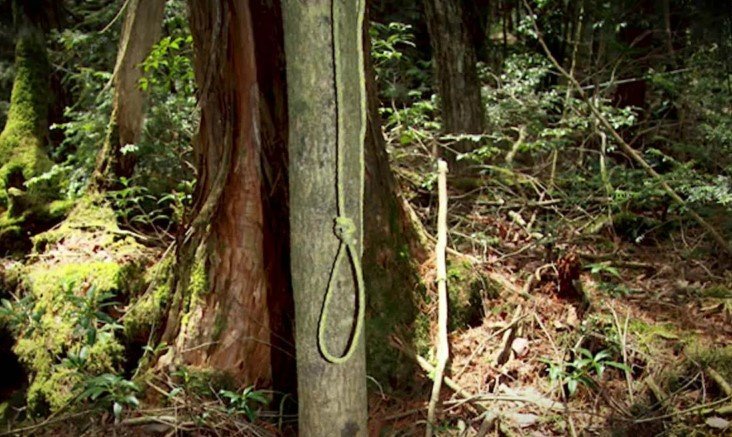 Another subject of Japanese folklore is often associated with Aokigahara. Due to the number of deaths there, it is said the yūrei, analogous with ghosts in Western legends, haunt the forest. These souls have been kept on earth, barring them from a peaceful afterlife, for any number of reasons according to legends.

Usually, they are the result of sudden or violent deaths such as murder or suicide leading to unresolved emotions after death. Their appearance was rumored to be countered with proper burial and post funeral rites, performed so that they could join their ancestors.

But, powerful unresolved emotions such as a desire for revenge, love, jealousy, hatred, or sorrow could keep the soul trapped on the earth until they are laid to rest; either by performing the missing rituals, or resolving whatever emotional conflict that still ties them to this realm. Due to the nature of the deaths at Aokigahara, it is easy to see why this location is rumored to be haunted by these spirits.

The high rate of suicide has prompted officials to placing signs all over the forest, in both the Japanese and English languages, pleading with those who have gone there to seek professional help rather than taking their own life. Also in an attempt to lessen the Forest’s association with suicide officials no longer keeps an official tally of suicides. As you may expect none of these actions has had any noticeable effect.

Aside from attracting potential suicide victims its reputation attracts a ghoulish form of tourist. These tourists leave the official trails leading to popular tourists’ attractions such as the Ice Cave and Wind Cave and mark their path through the forest with plastic tape or other debris.

Officials try to remove the tape to cut down on the litter. Still, tourists and thrill-seekers leave more and more litter on their way into the forests and on trails.

Starting in 1970 forest workers and local volunteers began an annual “Body Hunt.” Using a variety of unofficial trails searchers comb the forest looking for bodies. When a body is found it’s taken to a room for temporary storage. Nothing odd there but here’s the twist.

Remember the yūrei, ghost, mentioned earlier, when a body is placed in the room for storage the forest workers play a game of janken (rock, paper, scissors). The loser of this game stays with the corpse, sometimes overnight, until it is removed. Why? The yūrei of the corpse if left along will rise and began screaming. And you thought your job sucked.