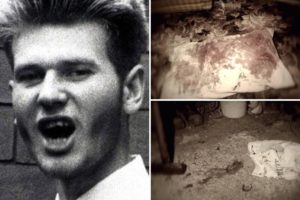 Anthony Arkwright was born in the mining community of Wath-upon-Dearne, in what was then the West Riding of Yorkshire. He is one of five siblings who were abandoned by their mother at an early age; his father was a miner.

Arkwright spent most of his childhood in care homes and performed badly at school, which led to a life of crime and a sentence in a borstal. Rumours persisted that he was the product of an incestuous relationship.

By the time he was 21, Arkwright was working for scrap merchants in Mexborough, South Yorkshire, but he was sacked on 27 August 1988 for a poor attendance record. It was after this sacking that the 56-hour killing spree began.

Following his dismissal, Arkwright returned to Wath-upon-Dearne, where he stabbed his grandfather, 68-year-old Stasis Pudoikis, which resulted in Pudoikis suffering paralysis.

Afterwards, he dragged Pudoikis into a shed on his allotment and used a 14-pound (6.4 kg) lump hammer to crush his skull. After killing his grandfather, Arkwright went on a pub crawl in Mexborough and dropped hints about the murder, saying things such as, “It’s been murder on the allotment today.”

It was believed that Arkwright’s second victim was his grandfather’s housekeeper, 73-year-old Elsa Kronadaite, whilst he was in the process of taking his grandfather’s savings of £3,000. The bodies of both Pudoikis and Kronadaite lay undiscovered for six days.

The next to be killed was Arkwright’s neighbour Raymond Ford, an unemployed former teacher who was already being bullied by him. Arkwright had also stolen items from Ford’s flat and Ford reported him to the police for the thefts. Arkwright knew this and wanted revenge.

At 3:00 am on 28 August 1988, he entered Ford’s flat completely naked apart from a devil mask. Arkwright stabbed Ford more than 500 times and draped his entrails around the room that he had been murdered in. He then went home to shower off the blood and at 7:00 am, the police came around to arrest him for burgling Ford’s flat, completely unaware that Ford lay dead next door.

After being interviewed for three hours and then released on police bail for a court appearance the following week, Arkwright went out for another drinking session, amazed at being a murderer allowed to walk free from a police station.

On 29 August, early in the morning, Arkwright entered the specially adapted bungalow belonging to his other next-door neighbour, Marcus Law. Law, who was 25 at the time, was in a wheelchair owing to a motorcycling accident.

In what Arkwright would describe as a punishment for all the cigarettes that Law had scrounged off him, he stabbed Law at least 70 times, before trying to gut him. When this failed, Arkwright inserted one of Law’s crutches into a gaping wound in his stomach. He also gouged out Law’s eyes and inserted cigarettes into his eye sockets, ears and mouth.

After he had left Law’s bungalow, he bumped into Law’s mother and remarked upon her son’s suicide whilst smiling. She went around to her son’s bungalow and found him dead there. Police arrested Arkwright, who confessed to four murders, which meant that searches for the bodies of his other victims had to be organised hastily. 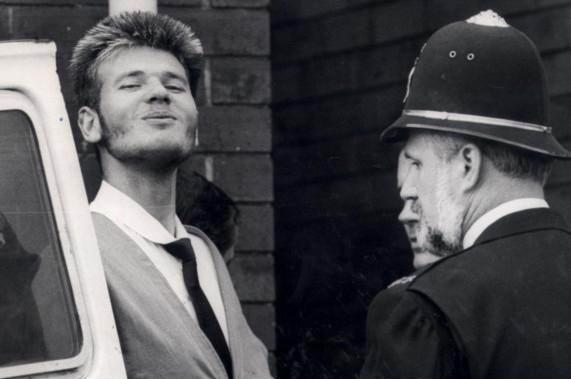 It was suggested that when shocked police had found the three remaining bodies, Arkwright felt that he was losing control, and so invented a fifth victim, leading to further searches of lakes and drainage ditches.

Whilst at HMP Hull awaiting trial, Arkwright smeared the walls of his cell with excrement in a dirty protest at not being recognised and revered as he believed he should be. After convincing prison doctors that he was insane, he was transferred to Rampton Hospital in Nottinghamshire.

Psychiatrists there determined that he was sane and fit to plead, with one doctor commenting that Arkwright was “the sanest person in the building”.

At his trial in Sheffield Crown Court in July 1989, Arkwright pleaded guilty and was sentenced to life. It was commented upon that Arkwright was an “evil fantasist” who had a desire to be as famous as Jack the Ripper. The case against Arkwright for killing Kronadaite was unproven and at the trial, the judge ordered the case to lie on his file.

In 2003, Home Secretary David Blunkett changed the law so that certain people sentenced to life in prison, would spend the rest of their lives there, with no chance of parole.