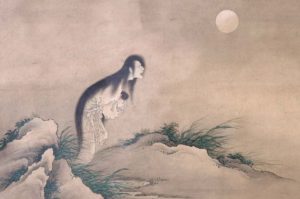 Located in the outermost part of Southwestern Nova Scotia, in Yarmouth County, is a place called Seal Island. An island which is not only home to one of the oldest wooden lighthouses in Canada, it is also home to a ghost named Annie.

Before anyone lived on Seal Island, shipwrecked mariners lucky enough to have reached its shores alive often died of starvation and exposure during the harsh winter months. By the early years of the nineteenth century a grim spring tradition had evolved, as preachers and residents from Yarmouth and Barrington came to the island to find and bury the dead.

There was much concern about the loss of life (on one occasion 21 people were buried in shallow graves in a single day) and in 1823, two families, the Hichens and the Crowells settled on the island in the hopes of assisting the unfortunate souls cast ashore during the winter storms.

The night was dark, with drizzling rain, and blowing a strong southwest gale, with heavy head sea all the way along the coast. Apparently, the electric light became disarranged, and this is supposed to have altered the deviation of the compass, and although the Seal Island light had been in sight for about an hour, the Ottawa ran aground.

The steamer struck Blonde Rock at 5 a. m. on Sunday November 1st, at low tide. As soon as she struck, a large hole was pierced through her bottom in the engine compartment, and the steamer began to fill with the rise of the tide.

With the starboard side being broadside to the sea, with a strong list to starboard, the sea became worse and broke heavily over the ship.

With her stern submerged, the lifeboats were launched, and in one of those boats were three men, and Mrs. Annie Lindsay, the ships stewardess.

When the boat was about two ship’s lengths from the steamer a tremendous wave overturned the boat, throwing its passengers into the sea, trapping them all underneath the boat, except for one man who managed to climb on to the keel. After a few minutes, the mate also managed to climb on to the keel, leaving the stewardess, Annie Lindsay and the other man trapped under the boat.

Strong tides and waves made it difficult for the other lifeboat to rescue those in the water, but as their boat drifted in the heavy sea, the waves turned the boat up right again, and the two men got back in the boat.

Surprisingly, the man that was trapped under the boat managed to survive, but Annie was dead. After seven hours’ hard rowing against the wind and sea, the crew of the ill-fated Ottawa made it safely to Seal Island.

Mrs. Annie Lindsay was buried beside the East End church, and her grave was marked in later years by a concrete headstone made by the family of the light keeper. Some believe that when the coffin was later disinterred, it showed evidence that she was buried alive.

Her ghost has been seen many times wandering on the island. Her spirit stands on the shore looking ominously out to sea before vanishing. Is Annie fated to relive that fateful day over and over again? With so many lives lost on Seal Island, Annie is likely not alone.