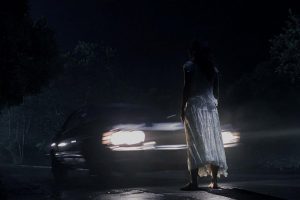 Hauntings on Scotland’s A75 Kinmount Straight, fifteen miles from Annan to Gretna Green, led to locals calling it Ghost Road and whispers of witchcraft.

Annan Road, A75 Kinmount Straight, which passes through Dornock, is said to be Scotland’s most haunted byway. The Scottish Office were making plans to improve it, but locals believed that it would rouse the haunters.

A villager said that other people might think the villagers are balmy, but they’ve seen and heard strange things and don’t want anything done that could further the paranormal activity. Some people are too afraid to drive on that road after dark. There are those who attribute the eerie incidents to witchcraft that people had practiced in the area of Annan Road.

Donna Maxwell was driving on the A75 near Swordwellrig when she saw a man jump into the road, about two feet in front of her car. He was in his thirties, short haired and wearing a red shirt and dark slacks.

She braked, shut her eyes and braced for an impact. When she opened her eyes, the car was stopped, but there was no sign of him. She contacted the Annan police. They searched the area, but there was no evidence of an accident.

Police Sergeant Graham Young sent a description of the man to the media that failed to provide further information. Since then, Maxwell has heard other people say they sighted the same man standing in the road.

Garson and Monica Miller were on the A75, near Annan, when they saw someone in their path. It was a middle aged man, wearing a Hessian sack folded over his head. His hands were outstretched towards them, holding what appeared to be a rag in his hand. They thought the car hit him, but when they stopped, he had vanished.

A lorry driver thought he hit a couple who crossed the road in front of his truck. When he stopped to investigate, they had disappeared. 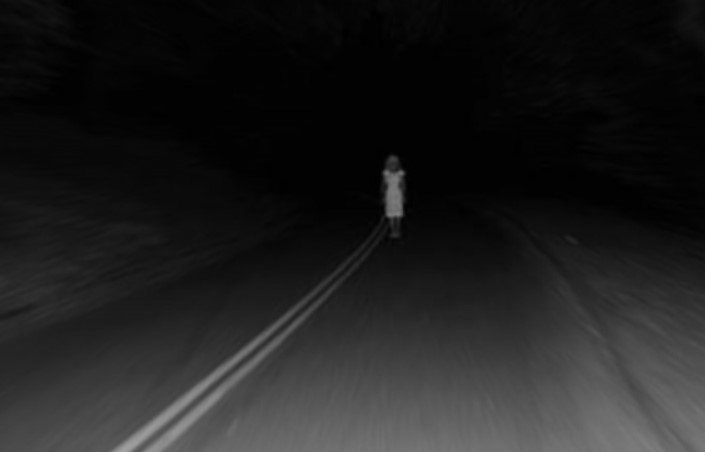 Jim Carlyle said he was driving on A75, approaching Dornock, when he saw an old lady garbed in Victorian dress appear in the mist. He slammed on his brakes, but the car drove through her.

Forty-five years later, Margaret Ching was riding in a car on the same part of the road. She saw the same specter and yelled for the driver to stop. They felt a cold shiver when their car drove through the wraith. In both cases, when they looked back, the woman was gone.

In 1962, Dereck and Norman were driving on the A75 near Kinmount, around midnight, when a large hen flew towards their windshield, but vanished before impact. The bird was followed by a spectral old lady, then phantoms of a screaming long-haired man, animals, including giant cats, wild dogs, goats and other fowl and eerie beasts that all disappeared.

The temperature dropped. When the car stopped, it began to shake violently. The motion ended when Dereck got out of the car.

The last incident was the brothers seeing a vision of a large van advancing towards them before it disappeared. Later Dereck learned that others had seen the same van and that witchcraft had been practiced in the area.

There have been cases when paranormal incidents were attributed to witchcraft. According to legend, a witch was burned at the stake and buried at Scrapefaggot Green. A boulder was placed over her grave to keep her there.

In autumn 1944, the American Army went to England to help the Allies and the stone was removed to widen the crossroad where her grave was situated. The paranormal events that followed were reported in Time Magazine. Paranormal investigator Harry Price suggested the stone be replaced on the grave. After the stone was restored, the incidents stopped.

Ireland’s Killakee House was haunted by a black cat who was believed to have been sacrificed in satanic rites that were practiced there and poltergeist activity. In the mid 1900s, a dwarf’s skeleton with a brass figurine of a demon was found under the kitchen floor. After the human remains were given a proper burial and a priest exorcized the building, the hauntings stopped.

In 1904, there was a fire that devastated Yazoo City, Mississippi. It is said that an old woman was a witch who died in 1884, cursed the town, came back from the grave and caused the blaze. Her grave, marked “T. W.,” is surrounded by chain links and located in Glenwood Cemetery.

There are many credible witnesses to Annan Road’s hauntings. The enigma is exactly what they are and what causes them. Could it be witchcraft, hallucinations or something else?