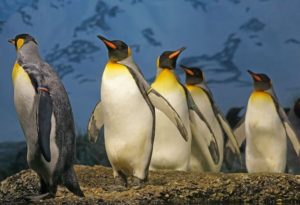 Researchers from the University of Turin analyzed 590 records containing sounds made by penguins. The project was carried out in collaboration with Italian zoos.

It turned out that animals follow the same language rules as humans. There are two key similarities.

First, the individual “expressions” most commonly used by penguins are very short, monosyllables. More often than not, we use short words such as “I,” “you,” “and,” “a,” “k,” etc.

In other words, in expressions with several syllables, we usually deal with short syllables. A similar picture was observed in the “speech” of the penguins.

As it became known, penguins with the help of sounds can introduce themselves, inform rivals that this territory is already occupied, call or find each other.

The researchers came to the conclusion that the principles of the languages we use are not based on their symbolic nature, but on deeper, universal, and, as it turns out, natural laws that regulate communication – since in the animal world there are similar patterns in the construction of expressions.