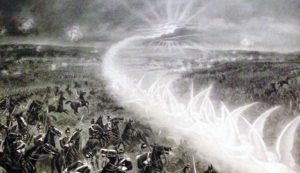 Warrior angels have appeared in art, literature, and film. All major religions have a concept of immortal beings who perform various tasks for the deity.

The majority of these tasks are peaceful: delivering messages, praising God, serving as guardians, and helping people pass from this existence to the next. Nonetheless, angels are also often called upon to make war with humans and even with one another.

Saint Michael the Archangel in Scripture, Legend, and the Early Christian Church

Michael the Archangel is the angel most associated with fighting. He was the angel named in the apocryphal Book of Enoch as the vanquisher of Lucifer and the other rebellious fallen angels. In art and literature, Michael is usually depicted wearing armor and bearing a resplendent sword. Catholics consider him the patron saint of the military and police.

In 701 B.C., Michael made one of his greatest battlefield appearances; destroying almost two hundred thousand Assyrian enemy combatants to save the city of Jerusalem.

In the fifteenth century, France’s warrior-saint Joan of Arc identified Michael, as well as Sts. Catherine of Alexandria and Margaret of Antioch, as one of the voices that instructed her on how best to attack and conquer the British.

Islam calls him Mikhail; he allegedly helped Mohammed and the early Muslims trounce the Queraysh tribe at the Battle of Badr Wells (other sources claim the angelic aide was actually Gabriel, leading one thousand warrior angels sent by Allah).

The Book of Revelation states that Michael did battle with the dragon and cast him out; it is implied that he is the angel with a key and chain who will do battle with the devil during the end-times and bind him for one thousand years, ushering in a millennium of peace.

A representation of Michael was usually carved onto early church doorways to protect the structure. Today, non-traditional or New Age beliefs sometimes include angel worship or attempts to contact angels; because of Michael’s identification with the warrior, he is still most often called upon for protection against harm.

Angels on the Front Lines: The Miracle at Mons and Other Battlefield Angel Appearances

There have been many reports throughout history of warrior angels appearing on battlefields to assist soldiers. The most famous of these occurred during World War I. In 1914, the English and Germans fought the Battle of Mons in Belgium.

Many of the English troops insisted that an entire regiment of white-clad, shining apparitions appeared between the two armies. Even though the British were badly overpowered and outnumbered, the Germans began to retreat once the angels arrived.

During the ensuing days, two other sightings of angelic cavalry and winged protectors were reported by British officers.

About a month later, a story titled “The Bowmen” was published in England; it described supernatural beings assisting the soldiers at Mons. Its author, Arthur Machen, claimed that his story inspired the angelic reports from Mons; however, many people believed just the opposite. Machen always insisted that he had never heard of the appearances prior to writing his story.

In 1918, near the town of Bethune, France, the German troops declared that a cavalry clothed all in white and mounted on white horses attacked them. The riders could not be killed with conventional weapons, including machine guns; and the Germans were again forced to retreat.

Angel battlefield appearances go way back. Attila the Hun asserted that he saw two luminous beings flanking Pope Leo when the Huns were about to enter Rome. These creatures brandished flaming swords and told Attila that they would kill him if he proceeded.

Prudently, he instructed his army to retreat. During the Crusades, captured Turkish sailors and soldiers occasionally swore that they’d observed armies of angels fighting on the side of the Christians. The Vikings believed in Valkyries, female warrior spirits who appeared in battle to guide the spirits of fallen soldiers to heaven/Valhalla.

Angels in Wartime: An Immortal Idea

Some religions take these notions literally, while others interpret them symbolically. In a sense, it does not matter whether an individual is a true believer or confirmed skeptic; warrior angels are a tremendously powerful concept, giving credence and form to humanity’s natural desire to see good triumph over and cast out evil.

They provide hope in the midst of chaos, and light in a world that sometimes seems very dark.

The angel as warrior is an ancient belief that has gone through many changes – it will no doubt go through many more, yet remain as immortal as the beings it purports to represent. As long as mankind makes war, angels will continue to do so as well.