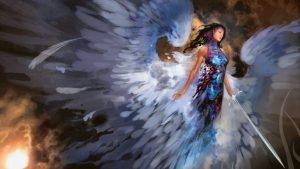 Angels, demons and fallen angels are recognized in nearly all religions. Unlike ghosts, these paranormal entities are ones who never had an earthly life.

Encounters with angels are considered extraordinary human experiences, within the realm of parapsychology. Other paranormal entities and angels have different categories and are experienced universally.

Some believe angels are the part of a person’s subconscious mind that allows communication with one’s higher power. Others believe angels are spirits. Some people believe they have guardian angels who stay with them from the moment of birth until death.

There are people who postulate that they are in one’s life for a brief time, to give a message or to help during danger or crisis as apparitions, intelligent ghosts, have been documented to do.

People who have sighted cryptids and angels have given different descriptions of them. Angels may appear as they are pictured in art, winged, wearing robes and having a halo of light.

They most commonly appear as ordinary people, ranging from beautiful well dressed men or women to a person wearing tattered clothing. They seem to appear when needed, then, disappear.

Sometimes, they manifest as a feeling of overpowering love, ray of light, slight breeze, light touch, scent of flowers or heard as wings fluttering, bells or trumpets.

It’s believed that angels are paranormal spiritual beings, superior to humans in intelligence and power. There are nine types of angels, divided into three choirs or spheres.

The first sphere includes counselors; the second, governors and the third, messengers. Seraphim, Cherubim and Thrones are in the first sphere; Dominions, Virtues and Powers, the second and Principalities, Archangels, and Angels.

Demons and Fallen Angels are not Poltergeists

Whether or not demons are fallen angels is a matter of debate. Neither are poltergeists, as some people who haven’t studied parapsychology have written. Poltergeists are a manifestation of psychokinesis, PK, the ability of the mind to affect matter.

These emotions are repressed and unleashed by the subconscious mind as PK. The treatment for the HAP is psychotherapy to release negative emotions. According to survival theory, a part of the human survives the death of the physical body which some say accounts for EAP activity.

There have been cases of destructive poltergeists and humans. Both have been called demonic; however they aren’t demons in the correct definition of the word.

Kay Kallandar, a nurse working in Port-au-Prince, Haiti, lived in a small unprotected house. Every night, she heard the beat of Voodoo drums and, in the morning, she often treated people who had wounds from those ceremonies.

Violence was prevalent in the area, but she had no problems, although it would be easy for anyone to break into her home. She asked a patient why no one tried to burglarize her house.

The man replied that people saw four large guards at each corner of the yard whose looks frightened them, so they wouldn’t even go on the property. Kay had often looked out of the windows and never saw the guards.

Angels are in the Paranormal Realm

These entities, like ghosts, cryptids, extraterrestrials and anomalous beings have been reported universally. Each of these paranormal divisions has its individual characteristics. Ghosts include apparitions, residual hauntings – impressions of energy on time and space without intelligence, and EAPs.

Cryptids are animals currently unknown to science, such as Big Foot and the Loch Ness monster. Some animals that were considered cryptids, such as the okapi and mountain gorilla, have been captured, validating their existence.

Aliens and UFOs, believed to be from other planets, have been universally reported. Anomalous beings have been sighted, globally, specific to various locations. An example is Mothman, native to West Virginia.

Spiritual emergence and many near-death experiences are of a spiritual nature and are within parapsychology’s realm, as are Marian apparitions, Christian sightings of the Virgin Mary. From the similarities between angels and other phenomena that’s been discussed, it’s evident angels belong in the realm of the paranormal.