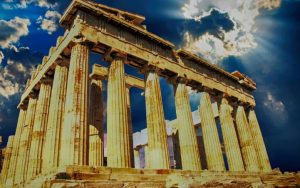 Alexandro Pirattini from the University of Notre Dame made an amazing discovery. On the stone blocks from which temples in ancient Greece are built, Alexandro noticed traces of hoisting machines. The results of the study are published on the website news.nd.edu.

Various sources say that the Greeks were the first to come up with primitive machines for lifting large boulders. Scientists note that cranes were not used until 515 BC.

But then, how majestic temples built before this crucial period were generally erected? Moreover, they also consisted of large blocks weighing 200-400 kg each. All elements were created around 700 BC.

On the studied blocks, double grooves were seen that ran in parallel. They definitely served to lift and lay stone elements.

Unfortunately, scientists have not yet stumbled upon ancient documents that would describe the cranes of that time.

According to Pirattini, the equipment had a combination of levers and cables, thanks to which stone blocks were installed in the right place. Maybe in the near future the secret of ancient Greek cranes will be revealed.