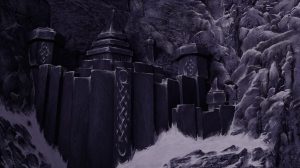 This story goes back to the 16th century. Then, according to the legends of local aksakals (Aqsaqal or aksakal metaphorically refers to the male elders in parts of Central Asia, the Caucasus and Bashkortostan), creatures that only vaguely resemble humans often emerged from the bowels of the earth.

Their height was less than 120 centimeters, instead of clothes, they preferred to cover themselves with clay or mud. In the hands, there was always a stick or a small lantern.

The underground inhabitants had their own language, similar to hooting and whistling. With the mysterious inhabitants of the underground depths, people rarely, but still came into contact. They gave them milk or meat, and also helped in case of any injury.

In the middle of the 18th century, several halflings were adopted by humans. They managed to teach speech and found out who they are. It turned out that these are the indigenous inhabitants of the Caucasus.

About three or four thousand years ago, giants, dwarfs and ordinary people lived in the mountains. But in the course of various wars, the giants were destroyed. But they built dolmens and other cyclopean structures. Dwarfs lived in these buildings, but when people began their hunt for giants, halflings took refuge in the dungeons that dotted the mountains of the Caucasus.

During World War II, the German invaders noted that grandiose cavities were observed underground. In an attempt to get inside, they often blew up passages that were narrow for humans.

As a result, collapses occurred, and they were unable to reach the depth. In the post-war years, various enthusiasts and researchers tried to explore the dungeons. Some speleologists even managed to crawl several tens of meters, but they could not achieve more.

In the 1990s, local researcher Artur Zhemukhov calculated the location of large underground high-rise cities using mathematical calculations. Almost every mountain in Kabardino-Balkaria has a formation similar to a vertical mine, from which narrow straight passages lead in different directions.

Due to the lack of proper funding and the ability to crawl inside on their own, they had to be content with what was exposed after mudflows. In 1996 and 2004, powerful rains washed away the passages to the dungeons. One of them even allowed a person to squeeze into the so-called vertical shaft.

Arthur Zhemukhov, together with like-minded people, did this. It turned out that the passage deepens 160 meters deep. There was some kind of hall there. In the center of it was a small pyramid, about 8 meters high. There were hundreds of small holes in the walls, 60-70 centimeters high.

Probably, mysterious underground inhabitants used to live in them, although, who knows, maybe they live now. A small stream flowed near the pyramid and was carried away somewhere deep into the settlement.

Alas, water helps not only to discover new passages to underground complexes, but also to hide them. Another collapse of the rock led to a complete blockage of the mine. Alas, since then no one has been able to descend into this dungeon.

However, it is far from the only one. Expeditions led by Vadim Chernobrov to Kabardino-Balkaria have borne fruit. Several similar mines were discovered, the entrance to one of them was cleared.

The descent into the premises was carried out three times from 2012 to 2015. It can be seen that the walls of the dungeon are perfectly flat. A 90 degree angle is maintained in places. The object was clearly man-made. But, the riddle lies in the fact that not a single person or even modern technology is able to create such a structure. Too narrow aisles.

In some places, the shaft expands to 2-3 meters, and sometimes narrows to 25-30 centimeters. All branches have a diameter of 35-40 centimeters and perfectly smooth walls.

When it became clear that a person would not be able to get deep into the dungeon, it was decided to launch a robot with a camera. But he could not complete the task – to penetrate into the lower hall. The passage was closed with a stone door. What is behind it is unknown. Perhaps, by analogy with the discovery of Artur Zhemukhov, a hall with a pyramid.

Vadim Chernobrov, based on the study of the complex, compiled several schemes of underground structures. Someone believes that this chain of dungeons is the city of halflings, about which legends have been preserved among many peoples of the Caucasus.

Vadim Alexandrovich himself assumed that these were not residential premises, but some analogue of modern factories or ancient technical structures. How these ancient installations worked, by whom and when they were built, and for what purpose such a complex rock dungeon should be placed at all are riddles that remain unanswered.

However, enthusiasts are still trying to find the entrance to these structures in order to further study them. By the way, in 2013, the participants of Kosmopoisk turned to the Academy of Sciences for a more thorough study of the dungeons. But the answer was unequivocal – these formations are of a natural nature and are traces of groundwater. In fact, the standard official answer. In fact, the truth can be much more interesting.