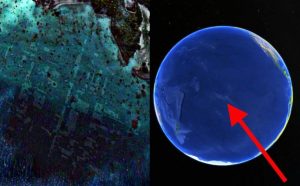 A well-known ufologist and virtual archaeologist from Taiwan, Scott Waring, again turned his gaze to satellite images of our planet, and the result was not long in coming – a huge structure was discovered in the middle of the Pacific Ocean.

Waring believes that this is an ancient alien city, built about 3 thousand years ago. It is located at the bottom of the Pacific Ocean and measures about 1 kilometer long and about 500 meters wide.

According to the ufologist, there are good reasons to believe that this city was founded by alien civilizations. It’s all about the design of the buildings and the materials used in the construction, says Waring.

Several millennia ago, there were no such ships that could deliver thousands of stone blocks to the center of the ocean. The researcher believes that only an extraterrestrial aircraft could perform such a difficult task.

The ufologist does not exclude the possibility that the ancient structure may be part of the legendary Mu continent, which once existed in the Pacific Ocean and went to the bottom as a result of a natural disaster.

In this case, we can talk about an ancient terrestrial civilization that possessed high technologies.