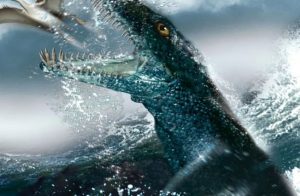 A mysterious creature has settled in a British lake and is so large that it easily drags geese under the water. Huge pike? Otter? Nessie’s relative? The locals are confused, reports lancs.live.

On the territory of the Lake District National Park in the county of Cumbria, in the north-west of England, there is Lake Ullswater, with an area of ​​​​almost 9 km². This is a fairly large lake with an average depth of 25 meters.

It is very picturesque, extremely popular among tourists and it has a lot of fish. But recently something that feeds on geese has settled in it.

One of the eyewitnesses of this phenomenon was 61-year-old Wayne Owens, in front of whom on different days a mysterious creature dragged three geese underwater.

This happened for the first time in early June 2022, and that day Owens was working as usual on the steamer, when he suddenly saw a rather large goose flapping its wings helplessly on the water, as if something had grabbed him from below.

Before the eyes of the man, the goose soon disappeared under the water and never surfaced.

The next day, Owens and the skipper were on board the ship, when both saw with their own eyes two more geese, one after the other, being dragged under the water in exactly the same way that Owens had seen the day before.

According to the skipper, he has been working on the lake for 36 years and has never seen anything like this before.

As for Owens, the incidents he saw so traumatized the man’s psyche that from that day on he refuses to go into the water of the lake.

He also posted on social media about what he saw and warned other people to be careful:

“Some people think I’m crazy, but I don’t get anything from it. I just want people to stay out of the water with their kids and small dogs,” says Owens.

Owens also urged local officials to put up some kind of warning sign regarding the “monster” hiding in the lake. However, his call to action went unheeded, with the local authorities only releasing a statement saying the following:

“We are aware of alleged incidents involving geese in Ullswater, but our team of lake rangers patrolled the area over the weekend and saw nothing out of the ordinary.”

Locals and Internet users speculate that Owens may have seen a huge pike, a giant catfish, an aggressive otter, or even a crocodile that some prankster or reptile breeder might have thrown into the lake. However, until now the true nature of this “monster” remains unknown.