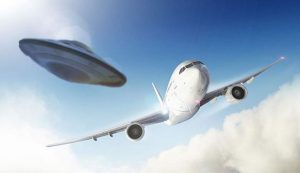 The video below was received on March 8 of this year by a passenger of the airliner who unexpectedly saw a mysterious disc-shaped object in metallic colors in the porthole. Astonished eyewitness captured a UFO on the camera of a smartphone and uploaded a video to the Internet.

Apparently, the alleged alien aircraft followed the plane. If you look closely at the footage, you can see that the upper part of the “flying saucer” glistened in the sun, and the lower part was covered with a shadow, and the line of the light partition was extremely clear and straight.

Thus, reputable ufologists unanimously concluded that we cannot talk about a fancy cloud, a glare in the camera lens or a chip on the window glass.

The mysterious “saucer” behind the airliner caught the eye of many passengers, and they could not find a rational explanation of what was happening. Some eyewitnesses were reasonably frightened for their own safety, but, fortunately, an unidentified flying object soon rushed off somewhere, disappearing from the witnesses field of vision.

It is reported that the pilots were subsequently interviewed, but both pilots claimed that they did not observe anything unusual during this flight.

Experts of the Mutual UFO Network, the largest international UFO organization, are convinced that representatives of an extraterrestrial civilization are not disposed towards us hostilely or kindly, but rather neutral.

Perhaps we are for them something of a kind of animals at the zoo, for which it is interesting to watch, not interfering and not disturbing anything in this either natural, or even artificial “menagerie.”