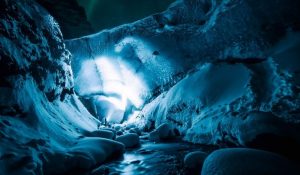 Researchers from Australia said they stumbled across the real underworld in Antarctica. A group of experts from the Australian National University noted that there are caves on the mainland that stretch for a decent distance inland (most likely about tens of kilometers).

It is surprising that the underground temperature is + 25° C, despite the minus indicators on the surface.

According to scientists, there is definitely a life in the caves, and a developed one. It has already been established that there are living lichens, algae and protozoa microorganisms in the caves.

Researchers suggest that perhaps large animals also live in caves. They may be unknown to science, so scientists were afraid to go down. An encounter with a potential threat may occur at any time.

After such a discovery, it is difficult to say that Jules Verne was a science fiction writer (it is worth remembering his novel Journey to the Center of the Earth, where the unique flora and fauna were found).

We hope in the near future we will learn more about the underworld.