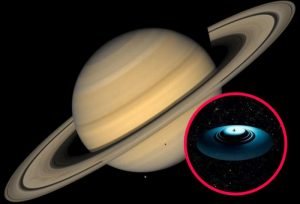 An amateur astronomer was looking at Saturn through a telescope and noticed a mysterious huge object that flew over the north pole of the planet.

He believes that the UFO was the size of the moon, but it was not a satellite orbiting Saturn. Object flew over the polar region of the planet and went into the darkness of outer space.

According to the ufologist, the object had a disc-like shape, which probably belongs to representatives of alien civilizations.

The researcher is confident that the footage received by the amateur astronomer is real, that is, the video has not been edited.

Many people who are fond of astronomy can freely acquire modern equipment for observing space objects. It would seem that quite recently, amateur astronomers directly from home recorded the passage of mysterious objects past the Moon, and now UFOs are observed much farther from the Earth, on other planets.

I wonder where NASA’s large telescopes are looking in this case?