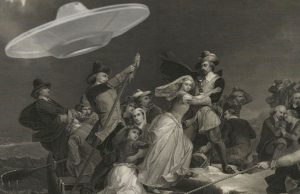 John Winthrop is quite famous for being the second governor of the Massachusetts Bay Colony. His writings and actions were powerful during the development of colonial New England, and he had great influence on the governing and religious standards that existed during early American history.

He is also well-known for holding a special paranormal title, due to his documentation of the first UFO sighting in the history of North America.

Winthrop was one of the many Puritans that came to the New World for religious freedom. The passion for his faith ran deep and the few remaining ties to Roman Catholicism in his community left him uneasy. He greatly feared the wrath of god would come upon them, and any event beyond the ordinary that occurred would typically be interpreted as a religious message.

By the time the Puritans had reached North America, the Pilgrims had already paved the way. The English presence was established quite well and they had quickly made many changes to the new land. Much of the Native American community was plagued by smallpox and their race was nearly non-existent. Winthrop often credited this as an act of God; clearing the way for his humble children of England.

Of all the things Winthrop has been credited for, his chronicles were perhaps the most regarded. In them, he began documenting all of the events he found significant, be it religious or otherwise. They were collected within a giant tome and published as The History of New England from 1630 to 1649. It’s here that we find his record of a strange object traveling through North American skies.

He noted in 1638 that a group of men, led by a man named James Everell had taken a boat out into the Muddy River at nightfall. When they were about a mile out, they witnessed a flaming light that “contracted into the figure of a swine”.

Everell said that it moved “as swift as an arrow” above the shore, darting back and forth between their location and the town of Charleston, approximately 50 miles away, for at least two hours. The men had also reported that their boat began moving against the current and suddenly ended up right back at the point where they started. Many other reputable members of the community talked of a strange light on this night too, but Winthrop didn’t provide any more details from the witnesses.

It’s important to mention that Everell was employed as a tanner, so he spent much of his time working with the hides of animals. This may be why he chose to describe what he saw as “the figure of a swine”, though maybe it was so complex that he just couldn’t place it. Another examination of the story, produced by The History Channel, suggested that the strange shape was caused by landing gear. In fact, if you look at a plane landing it could resemble an animal running across the night sky if you weren’t familiar with such a machine.

The time period completely rules out anything man-made, as balloons weren’t even flown until nearly 150 years later. Since Winthrop wrote that the object was seen for only a few hours, the chance of it being a meteor is out of the question as well.

The claims of the boat suddenly moving back to shore are equally puzzling, but did the object really move it? Or were these men just too preoccupied with watching the strange object to notice the true direction of the tide? If it was responsible, then it could actually line up with the episodes of lost time many alleged abductees face.

Another thing that comes to mind is the credibility of the witness. Are we able to trust the account of James Everell? Winthrop listed him as “a man of reputation, activity and good estate in Boston.” He was also noted as an upstanding member of the Boston church.

It would seem that Everell wouldn’t be the type of man to spend a drunken night blacked-out in a boat and wake up boasting about something so farfetched. It would only tarnish the town’s view of him and his other colleagues involved in the incident.

James Savage, founder of the first US chartered bank and prominent antiquary, prepared the most widely held edition of Winthrop’s Journal. He left his own opinions of the story in footnotes, saying that the men probably just imagined it as “some operation of the devil or other power beyond the customary agents of nature.”

Then he becomes fixed on the explanation of the boat’s movement, rather than the flying object itself; eventually writing the whole thing off on “ignis fatuus” (swamp gas) and an eddy, which is a swirling of fluid that happens when the current flows into an obstacle.

Swamp gas can be seen as a large, glowing mass and will hover from one place to another before it dissipates. However, this doesn’t really line up at all with the way Everell had explained the movements he witnessed.

It’s also very interesting that a man like Winthrop didn’t add anything further about the event. Did he have the same thoughts as Savage? Did he think of it as the by-product of overactive imaginations without considering it a true divine omen? Maybe flying pigs were just too baffling to associate with a scripture, but it’s hard to deny that something truly supernatural happen there.

Below is the text from Winthrop’s Journal.

“In this year one James Everell, a sober discreet man, and two others saw a great light in the night at Muddy River. When it stood still, it flamed up and was about three yards square; when it ran, it was con­tracted into the figure of a swine: it ran as swift as an arrow towards Charlestown, and so up and down about two or three hours. They were come down in their lighter about a mile, and when it was over, they found themselves carried quite back against the tide to the place they came from. Divers other credible persons saw the same light after, about the same place.”