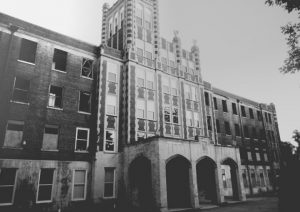 Waverly Hills Sanatorium has a collection of ghost stories that has made Louisville, Kentucky one of the most sought after locations for paranormal investigations.

During the nineteenth and early twentieth century, tuberculosis wreaked havoc on the United States. In 1900, Louisville, Kentucky had one of the highest death rates by tuberculosis in the entire country.

Geographic and environmental factors made Louisville the perfect place for tuberculosis to take hold and spread quickly. Louisville’s placement on low-lying swampland made the city an easy target for disease.

A hospital was constructed in 1910 to take in victims of the disease but quickly overcrowded and a second hospital was built. Waverly Hills was built in 1924 and although it was considered the most advanced tuberculosis sanatorium in the country, hundreds of people still died at the peak of the epidemic.

Medicines to combat tuberculosis were not yet available when the horrible disease was ravaging the country. The treatments prescribed at Waverly Hills were oftentimes just as horrific as the disease itself.

For instance, doctors placed balloons in patients’ lungs and then filled the balloons with air. This procedure usually ended badly. Ribs and muscles were sometimes removed to make room for the lungs to expand. Most patients did not survive these procedures.

Patients that did not survive Waverly Hills were dropped down a chute called The Body Chute. Bodies went through the tunnel from inside the hospital and landed at the railroad tracks at the base of the hill. This was done so that patients would not see the dead bodies leaving the hospital. Corpses were finally removed on trains.

Tuberculosis declined in the 1930s and medicines were readily available to treat the disease worldwide by the 1940s. Waverly Hills shut down in 1946 and was later reopened as Waverly Geriatrics Sanatorium in 1961. There are many stories of patient mistreatment from this time. Budget constraints caused conditions to worsen in the 70s and Waverly was closed indefinitely in 1982.

Waverly Hills saw many different owners in the 80s and 90s and by the year 2000 the building was in very poor shape. The homeless sought shelter in its rooms while vandals sprayed walls and destroyed property. Young people came to Waverly Hills at night looking for a good scare.

Waverly Hills gained its haunted reputation first from the young people who wandered the dark corridors. As this reputation grew and stories circulated, the famous ghosts of Waverly Hills began to emerge.

Some of the notable stories include a little girl that allegedly runs up and down the third floor hallway and a young boy who is spotted playing with a leather ball on the floor. A female apparition supposedly appears, wrists bleeding, and shouts “Help me!” A man dressed in white walks through the kitchen and the smell of food has been reported there.

According to Waverly Hills ghost lore, Room 502 might be the most haunted room of all. Voices have demanded that visitors “Get out!” and black masses resembling bodies have been seen in the windows.

Apparently, one nurse hung herself in this room while another jumped out of the window to her death on the ground below. Other paranormal activity includes slamming doors, disembodied voices, disembodied footsteps and screaming.

Evidence obtained by members of The Atlantic Paranormal Society (TAPS) was featured on Sci-Fi Channel’s Ghost Hunters. Evidence included video of a short figure running from one side of a hallway to another.

Today, Waverly Hills is a hotspot for paranormal investigations. Investigators have obtained audio recordings of voices, moaning and footsteps. Others have reported being touched, spoken to and having objects thrown at them.