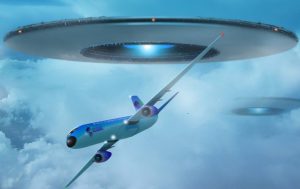 The pilots said they witnessed UFOs in the air perform maneuvers that no man-made aircraft could perform.

One example is lights that appear in one place, disappear, and reappear a few seconds later in another place. Sometimes these lights zigzag or perform maneuvers that no man-made aircraft is capable of. What these objects are remains a mystery to all of us.

Many UFO researchers believe that some of these objects are extraterrestrial technology, that is, not created on Earth.

They have become so popular that even NASA is trying to figure out what these mysterious objects are. Moreover, the Pentagon also has its own UFO office.

Recently, US pilots on more than 15 commercial airliners said they have encountered unidentified flying objects (UFOs) in US airspace in recent weeks.

Researcher and broadcaster Ben Hansen first mentioned UFO sightings on social media. He then used his YouTube channel to post several videos detailing the incidents. According to Hansen, the pilots explained that the sightings took place over a period of seven weeks. In all cases, luminous air objects were observed.

UFOs are visible in the airspace from the US Midwest to the Western Pacific. However, these were not ordinary UFOs. The objects were reportedly performing unconventional aerial maneuvers in a closed circle. Some pilots compared them to Formula 1 racing cars.

Several sightings were immediately reported to air traffic controllers. However, no official investigations are known to have taken place. And this is despite the fact that the events were reported to at least one division of the Federal Aviation Administration (FAA).

A curious series of sightings occurred a few months ago, in August 2022. This involved a private Gulfstream 650 jet, commanded by former Navy F-18 pilot Mark Halsey. Halsey was accompanied by a co-pilot. They flew from Florida to Hawaii.

Flying over Los Angeles, the pilots observed from 4 to 7 bright objects flying at an altitude of five to ten thousand feet. The objects performed erratic maneuvers.

Man-made aircraft clearly cannot perform such exotic maneuvers. What the pilots saw most likely was not earth technology. This is the only thing that the pilots thought about at these moments.

Based on the strange maneuvers of the UFOs and the speed they displayed, none of the pilots thought they were conventional aircraft.

The Gulfstream 650 pilots told Hansen that the incident had been relayed and reviewed in a private meeting and forwarded to the Joint Flight Command.

A few weeks after the incident, similar reports of UFO sightings began to surface. Commercial pilots began to release more information about their sightings, which eventually made it onto social media.