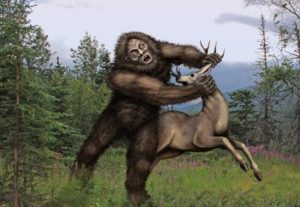 The Almas or Almasty, Mongolian word for “wild man,” is a species of hominids said to live in the Caucasus and Pamir Mountains of central Asia, the Altai Mountains of southern Mongolia, the Karelsky Isthmus between the Gulf of Finland and Lake Ladoga and the Arkhangelsk Region.

Almas are between four and a half to five feet tall. Their bodies are covered with hair and they have human-like facial features including a prominent brow-ridge and a weak chin.

Generally, they are unclothed, but a few sightings refer to them wearing primitive clothing. Many cryptozoologists have been intrigued by the similarity between these descriptions and reconstructions of Neanderthals.

Almas resemble the Yeti but have shorter arms. They have less facial and body hair than other bipeds. The nocturnal and primarily herbivorous creatures have been known to attack sheep, eating only the liver.

There are legends of sightings and human-Almas interactions dating back several hundred years. Some reports describe primitive communication between Almas and humans by using hand gestures and exchanging goods.

Drawings of Almas appear in a Tibetan medicinal book which contains thousands of illustrations of various animals, but not one mythological animal such as are in similar medieval European books. All these animals are living and have been seen in modern times.

In the early 1400s, Hans Schildtberger recorded his observations of Almas while he was in Mongolia as a prisoner of the Mongol Khan. He had been captured by Turks and sent to court of Tamerlane, who put him into the entourage of Mongol Prince Egidi.

Their bodies, except for hands, were fur-covered. They were like wild animals and ate foliage, grass and whatever else they can find. Egidi was given presents of an Almas man and a woman, three wild Przewalski horses and other animals which not found in Germany.

A female Almas, Zana, is said to have lived in the isolated mountain village of T’khina in the Caucasus; but hard evidence is lacking. She was captured in 1850 and, allegedly, had children by a man, Edgi Genaba.

The children had normal human appearances. Several of these offspring died in infancy. Some speculate these early deaths to were due to Zana’s genetic incompatibility with a human.

Genaba gave four of the surviving children to local families. One of their skulls was examined by Dr. Grover Krantz in the early 1990s. He found it to be without Neanderthal features.

If Krantz was correct and the skull is Zana’s son’s, it would indicate that she may have been a member of an isolated tribe, culturally different from her captors’ society, as to make her seem non-human to them.

Another case is said to date from around 1941, shortly after the German invasion of the USSR. A “wild man” was captured somewhere in the Caucasus by a detachment of the Red Army. He appeared human, but was covered in fine, dark hair. Interrogation revealed his apparent inability (or unwillingness) to speak, and the creature is said to have been shot as a suspected German spy.

Interrogation revealed his apparent inability or unwillingness to speak. He was shot as a German spy.

British anthropologist Myra Shackley has speculated that the Almas are a surviving species of Neanderthals.

Others believe they’re related to the Yeti of the Himalayas.

Another theory is that they are humans with congenital disorders and/or mental retardation abandoned by society.

Natives often see no major difference between Almas and humans and regard them as wild people.

The creature is not currently recognized or cataloged by science. Furthermore, scientists generally reject the possibility that such megafauna cryptids exist, because of the improbably large numbers necessary to maintain a breeding population.

However, cryptozoologists think that the probability of the existence of these species of hominids is very high.