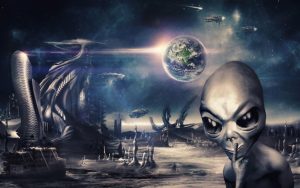 Rodney Cluff believes that he has unraveled the phenomenon of the appearance of aliens on our planet and other space objects.

The fact is that, according to the expert, humanity proceeds from an erroneous concept of the structure of the Earth. In his opinion, the outer shell of our planet is about half of the total size. Then comes a huge hollow space where alien cities, bases, entire countries can be located.

Next comes a cobweb of a substance that allows you to restrain the thermonuclear processes of the planet’s core. The core itself is a real star – a generator of an incredible amount of energy.

Thanks to this power, space and time can be distorted, portals open, so aliens fly from one cosmic body to another, while not overcoming the vast distances of the Universe.

In fact, this theory may well be true. The fact is that the data on the structure of the Earth are calculated on the basis of the mass and density of our planet. None of the earthlings has ever dived to a depth of more than 12 thousand meters (Kola well).

And what is at the mark of 25,000 meters or 50,000 meters? We simply don’t know. All supposedly known data is nothing more than a theory.

Based on the analysis of UFO movements and numerous observations in different parts of the globe, it can be concluded that these devices move equally quickly through the air, in water and even in soil.

Apparently, there is a technology for using thermonuclear fusion, which allows you to move not in time and space, but through any matter without consuming energy, bypassing the forces of resistance and the laws of physics.

It is difficult to imagine what laws of physics hypothetical aliens use.

It sounds fantastic, but in his book, Rodney Cluff relies not only on theoretical calculations, but also on the reports of those who were abducted by aliens.

People often say that they were at alien bases in the bowels of the Earth. That is, we can conclude that these are not aliens at all, but more developed representatives of another civilization cohabiting with humanity.

Reports of an incredibly huge network of underground tunnels that go tens of thousands of kilometers fit perfectly into this hypothesis. Thus, it can be assumed that intergalactic flights are a distant future for mankind, and the last century for our underground neighbors.

You can open a portal in the core of any cosmic body, if it has not cooled down, and instantly move to the required point in the Universe.

That is why UFOs often fly through the rock or hide not in the sky, but under water or in Volcano. There is their base and a portal for traveling to planets and galaxies.

Therefore, UFOs are mostly seen on Earth, and not in space.

Rodney Cluff’s theory is quite controversial, but according to some UFO researchers, it has a chance to be true. After all, over the past ten years, ufologists have collected data on more than 12,000 UFO sightings. But at the same time, only dozens of such objects were seen in near-Earth space.

It turns out that the remaining thousands simply used a different method in order to leave the Earth. And the version of Rodney Cluff is very similar to the truth.

Rodney Cluff, one of the most famous supporters of the Hollow Earth theory today and author of the book World Top Secret: Our Earth is Hollow, was among those who were planning to organize an expedition to the North Pole and finally locate the entrance to Inner Earth, which has been so successfully covered up over the years.

The expedition didn’t happen in the end due to some financial and organizational setbacks, but Cuff remains hopeful that one day they’ll get there, find the hole and finally catch a glimpse of Hollow Earth and its inhabitants.

We Could Find Alien Life, But Politicians Don’t Have The Will