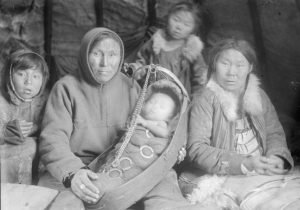 The Kets are an indigenous people living in Siberia and considered one of the smallest ethnic groups in the region.

Their appearance, language, and traditional semi-nomadic lifestyle has left scholars confused about their origins, with some suggesting a connection to the indigenous tribes of North America.

There is even Ket folklore that says they came from outer space. What is the true origin of these seemingly unusual people?

The Ket people settled in Siberia

The word “ket” can be translated as “man” or “man” and is the modern name for this particular Siberian ethnic group. Prior to this, however, they were known as Ostyaks or Yenisei Ostyaks (a Turkic word meaning “outsider”), a reflection of the area where they lived.

The Kets originally settled in the middle and lower basin of the Yenisei River, which is located on the territory of the modern Krasnoyarsk Territory of the Siberian Federal District of Russia.

Traditionally, they led a nomadic lifestyle, hunting and trading furs of animals such as squirrel, fox, deer, hare and bear with Russian traders.

They built tents out of wood, birch bark and skins, bred deer and fished from canoes. Many of these activities are practiced to this day.

While the Ket population remained remarkably stable at around 1,000 throughout the 20th century, the number of Ket speakers has been gradually declining. This language is unique because it is considered a “living linguistic fossil”.

Linguistic research conducted in the Ket language has led to the theory that this people is somehow related to some Native American tribes of North America, and that the latter migrated from Siberia many millennia ago.

The culture of this very small tribe is fraught with many mysteries and secrets. Like many other peoples of Western Siberia, the Kets animate the world around them, considering it to be alive.

As the ubiquitous missionaries of the Russian Orthodox Church did not try to change this belief, but nothing good came of this venture. The Kets have still retained their ancient beliefs.

Kets live in a harsh, but surprisingly beautiful region. And at the present time they have retained a careful, sometimes even reverent attitude towards the nature around them. It was inherited by these people from distant ancestors.

The tiny settlements of the Kets are located mainly on the banks of the middle and lower reaches of the Yenisei. Alas, the history of this people was “lost” in the thickness of time. Only legends remain.

However, the arrival of the invaders in this area forced the Kets to flee to the Siberian taiga in the north.

The legends say that these invaders were the Tistadas, or “stone people”, who may have been one of the peoples who formed the early steppe confederations of the Huns. It is also assumed that these peoples were nomadic reindeer and horse breeders.

The mysterious language of the Ket people

It can be said that the most intriguing aspect of the Ket people is their language. To begin with, the Ket language is unlike any other language spoken in Siberia.

In fact, this language belongs to the language group known as Yenisei, which consists of a number of related languages ​​that were spoken in the Yenisei region.

Apart from Ket, all other languages ​​of this family are now extinct. The Yug language, for example, was declared extinct in 1990, while the rest, including Kottic and Arin, became extinct by the 19th century.

There is a fear that the Ket language will also die out in the future. According to censuses taken in the 20th century, the Ket population remained stable for decades, neither increasing nor decreasing.

However, it is alarming that the number of Kets able to speak their native language is declining.

For example, during the 1989 census, 1,113 Kets were registered. However, only about half of them could speak Ket, and the situation was getting worse.

An Al Jazeera report from 2016, for example, argued that “there may be only a few dozen people left who are fluent in Ket, and mostly people over 60 years old.”

The Ket language has attracted the attention of linguists because it is believed to be descended from a Proto-Yenisean language that may have been related to languages ​​as diverse as Basque in Spain, Barusaski in India, and Chinese and Tibetan.

Edward Vajda, a historical linguist at Western Washington University, even hypothesized that Ket might be related to the North American Na-Dene language family, which includes languages ​​such as Tlingit and Athabaskan.

Finally, it was noted that if Wajda’s hypothesis proved to be correct, it would be a very significant discovery, as it would shed more light on the question of how the Americas were settled.

In addition to linguistic links, researchers have also tried to establish genetic links between Kets and Native Americans to further support the migration hypothesis. However, this attempt was not very successful.

First, the few DNA samples that were obtained could have been contaminated.