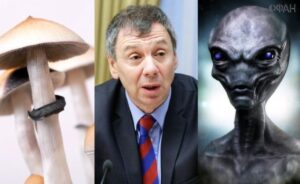 Disputes about the existence of extraterrestrial civilizations have been going on for a long time.

At different times, mankind has attributed these or those qualities to them, but for the last 50 years, the opinion imposed by Hollywood has dominated in popular culture that these are certainly “grey men” who fly over our planet on their saucer ships and kidnap earthlings for their inhuman experiences.

Director of the Institute for Political Research Sergei Markov is convinced that this is not so: the last thing an alien superintelligence might want is to hunt down “drunk farmers from Texas”, reports riafan.ru.

“I did a little bit of UFO research when I studied at the Moscow Aviation Institute at the faculty of aircraft,” said the political scientist.

“Today, with regard to extraterrestrial civilizations, the following idea prevails: they form from time to time, but since our Universe is 14 billion years old, and the suns, which “live” for several billion years, expand and explode, civilizations of certain intelligent organisms flare up and go out, not having time to establish contact together.”

The expert added that the concept of “shimmering” civilizations is currently the most plausible. According to him, the likelihood that, in addition to people, there are other intelligent beings in the universe is extremely high.

“If aliens exist, then they are definitely not like us,” Markov is convinced. – We can imagine a civilization consisting of some kind of pseudo jellyfish living in the ocean, or even mycelium! As you can see, there is practically no chance that they will come to us on a saucer. ”

Mycelium is the vegetative part of a fungus or fungus-like bacterial colony, consisting of a mass of branching, thread-like hyphae.

The political scientist noted that an intelligent life form in general can be non-carbon.

“You can talk, for example, about the civilization of radio waves,” the expert suggested. “But due to the prevalence of carbon and hydrogen in the Universe, it is more promising to think that aliens are” made “of these chemical elements.”

The U.S. servant opens up on Rendlesham UFO incident