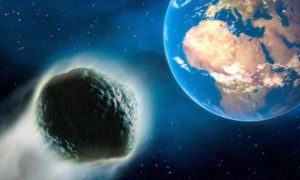 Aliens downed Tunguska meteorite to protect our planet from devastation, stated Russian scientist Yuriy Lavbin. He showed 10 quartz crystals that he found at the place of the meteorite’s crash. Several of the crystals have holes in between, so they can be united in a chain.

What could this chain serve for? Besides, some crystals have strange drawings on them. We don’t have any technologies that can print such kind of drawings on crystal. We also found ferrum silicate that can not be produced anywhere but in the space”, – the scientist states.

The meteorite’s crash took place long time ago, in summer of 1908. An enormous volcanic ball rushed over the sky with terrifying wallop and thunder-like sound. All the citizens were frightened to death and scared to move out of their houses.

A flight of a “flamy alien” ended up in an hour in deserted taiga area. In a matter of seconds an explosive wave spread for 40 kilometers, devastating everything living around.

It was not until many years later that a Siberian scientist set up an expedition to place of the meteorite’s crash. They searched carefully through the river banks and found there unusual quartz boards.

Mr. Lavbin states that such solid stones do not exist on the Earth. He said about the experiment that was taken on the crystals: scientists tried to put some of the same drawings that were on the stones initially with a laser machine.

How surprised they were to realize that the laser (that usually cuts metal objects into pieces) managed to put just some faint stripes.

The stones though have an entire system of different lines and circles on them. Scientists suppose that the stones used to be a part of the navigational system of a spaceship. All stones united form a map, which they used to cruise through the Universe.

In 1908 the UFO is thought to be hit by the meteorite that weighed 1 billion tones. If the meteorite fell down on the Earth, all the people would have been dead. But the aliens interfered and put their lives to save our land.

A strange portrait of a strange person on one of the stones proves this hypothesis. Isn’t it the pilot that once put his life for the sake of our future life?