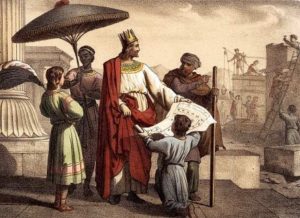 King Solomon was famous for his wisdom, wealth and power and many legends surround his name. According to an interesting tale from Talmudic literature, he built the First Temple of Jerusalem with the help of the Shamir, a substance or a device (sometimes called a worm) that was able to cut through stone, iron or even diamond.

Such a substance or device would be considered highly advanced even by today’s standards. However, in the 10th century BC it would have been considered nothing short of magical.

Considering the possibility of aliens visiting the Earth in ancient times, could the Shamir have been a product of alien technology?

As the tale goes, Solomon wanted the temple to promote peace so he decided not to use tools that could also cause bloodshed and war.

Referenced throughout the Talmud and the Midrashim, the Shamir was reputed to have existed in the time of Moses, as one of the ten wonders created on the eve of the first Sabbath, just before YHWH finished creation.

Moses reputedly used the Shamir to engrave the Hoshen (Priestly breastplate) stones that were inserted into the breastplate. King Solomon, aware of the existence of the Shamir, but unaware of its location, commissioned a search that turned up a “grain of Shamir the size of a barley-corn”.

Solomon’s artisans reputedly used the Shamir in the construction of Solomon’s Temple. The material to be worked, whether stone, wood or metal, was affected by being “shown to the Shamir.”

Following this line of logic (anything that can be ‘shown’ something must have eyes to see), early Rabbinical scholars described the Shamir almost as a living being.

Other early sources, however, describe it as a green stone.

In the Book of Kings it is written: “For the house, while it was in the building, was built of stone made ready at the quarry; and there was neither hammer nor ax nor any tool of iron heard in the house while it was being built.”

The midrash tells us: “The stones moved of their own accord; they flew and rose up by themselves, setting themselves in the wall of the Temple and erecting it.”

Accounts differ as to how King Solomon came into the possession of the Shamir. Some say that it was given to him by Asmodeus, the king of demons while others say it was brought to him by a holy eagle. In any case, it was no larger than a “single grain of barley-corn”.

But the most intriguing aspect of the Shamir is the way it had to be kept. Regular vessels were unfit to store it as they disintegrated. Instead, it had to be wrapped in wool and kept inside a lead box filled with barley bran.

This is what gives credence to this legend, as folkloristic tales would not make a leaden box of greater resistance than an iron or gold one.

The most puzzling part of this story is that no one really knows what the Shamir was.

Furthermore, King Solomon’s most prized possession did not last. According to Hebrew texts, the Shamir became inactive as the years passed. By the time Nebuchadnezzar destroyed the temple in 587 BC, it had lost all of its powers.

Based on this description, many have come to believe the Shamir was in fact radioactive in nature. Was King Solomon one of the few chosen humans gifted with alien technology?