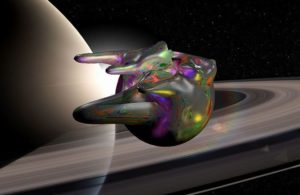 Arwen Nicholson and Duncan Forgan of the University of Edinburgh (UK) used computer simulations to prove that if representatives of extraterrestrial civilizations were able to travel from one planet to another, they would fly across our entire galaxy in a relatively short period of time and visit our planet.

Voyager 1 spacecraft was able to move away from the Earth at a distance of less than one light day in 36 years of its mission. However, according to Nicholson and Forgan, it takes an alien spaceship only ten million years to explore the whole Milky Way.

The ship would need to travel at the speed of one-tenth the speed of light, if accelerated due to the gravitational field of stars. During the 1960s, a theory appeared about “smart” space probes capable of replicating themselves.

American astronomer Ronald Bracewell believed that mankind should do its best to invent such probes, rather than catch radio signals of artificial origin, as suggested by SETI program. In 1949, John von Neumann developed a mathematical model of the device that was cloning itself.

According to current calculations made by Nicholson and Forgan, there are three possible scenarios for such probes to operate. This includes flying with running engines, the use of gravitational acceleration and, finally, “jumping” from star to star.

Even the Voyager is capable of “bouncing” from gravitational fields of the solar system. Thus, green aliens are unlikely to be found on Earth, the scientists believe. If aliens ever visited our planet, it was robotic vehicles, rather than living creatures.

Famous science fiction writer Arthur C. Clarke gives a description of such visits in his novel “Rendezvous with Rama.” In the book, a group of terrestrial astronauts gets inside a giant cylinder stuffed with electronic equipment, approaching the Sun.

Nicholson and Forgan believe that alien probes are able to run their own course. They scan the planets of star systems, searching for signs of life there, and create their own copies, which, in turn, search for new stars.

To crown it all, it is quite possible that such probes are created by several highly-developed extraterrestrial civilizations. It is also possible that some clone ships may attack other ships as a result of technical failures and destroy them. In any case, such stories can be found in science fiction literature.

One can also assume that such ships communicate with each other to carry out their tasks more efficiently – not to explore one and the same object repeatedly, for instance.

However, we should not delude ourselves about the contacts of alien robots with earthlings. It is possible that alien probes are equipped with special systems to determine the level of intelligence of the living creatures within range of their activities.

Aliens are not interested in establishing communication with intelligent beings. The purpose of robotic devices is the collection of information about the planets, not making contact. Moreover, in all probability, alien space vehicles are programmed to attract as little attention as possible.

There is no reliable information, for the time being, to prove that UFOs, or flying saucers, are vessels from other civilizations. One can only build theories, like Nicholson and Forgan do, and wait for brothers in mind, if they do exist, to show themselves to us.